Who is model Kinsey Wolanski dating after Ex-Boyfriend Vitaly Zdorovetskiy? 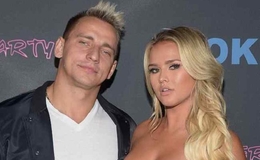 Kinsey Wolanski, who enjoys her modeling and acting career success, raised curiosity among their fans after sharing the breakup news from her ex-boyfriend Vitaly Zdorovetskiy via Instagram. It shocked the millions of her followers at the time. So, who is model Kinsey dating now? Find the answer in the article below.

The reknowned swimsuit model Kinsey Wolanski once used to be lucky in love with her ex-boyfriend, who is also a daring prankster. At present, it appears as the blonde beauty is super focused on her career and bears no interest in forming a new romantic love affair. 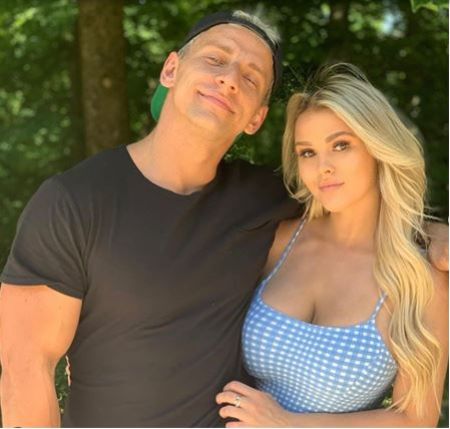 Kinsey with her ex-boyfriend Vitaly Zdorovetskiy before parting away. SOURCE: Instagram (Kinsey)

Well, Wolanski enjoyed a live-in relationship with the Russian-American YouTube star, Vitaly Zdorovetskiy. Infact, the two were an example of the world's daring couple. Her ex-partner Vilaty is primarily identified for his YouTube Channel "VitalyzdTV."

The former pair sparked romance for a few years until calling it off in March 2020. However, they are yet to spill the beans for their partition. But, it appears that the pair separated ways amicably when Kinsey was seemingly bothered with Vitaly's exclusive glamour and daring-filled lifestyle.

After the break-up, Zdoroverskiy shared a sad post clarifying the situation- "I got caught up in this life, and I'll be honest with you guys. I made some mistakes that I will regret for the rest of my life because, unfortunately, I've lost the girl I thought would be the mother of my kids."

As a football game stunt, Kinsey Wolanski sprinted across the Wanta Metropolitano pitch in the 2019 Champions League final match on June 1, 2019. The fans couldn't help take eyes of the model, neither did Tottenham midfielder Harry Winks who was caught starring at her. 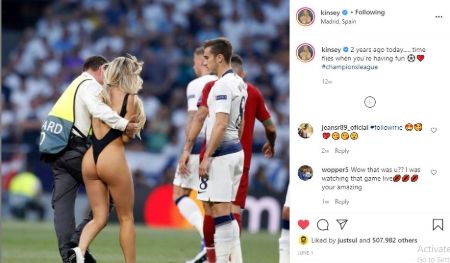 Having said that, Kinsey achieved a great deal of publicity. The sole motive of blonde beauty running across the pitch wearing the one-piece black suit was to promote Zdoroverskiy's adult X-rated prank website Vitaly Uncensored. Because of the incident, Kinseys spent four hours in prison.

Well, Kinsey's bold move garnered her over two million Instagram followers in a short time which proves the stunt was a success. And Wolanski claimed following her antics, she got the opportunity to connect with people worldwide. On June 1, 2021, via her Instagram, Wolanski marked the second anniversary of the infamous invading of the Champions League Finale pitch.

Kinsey Wolanski rose to fame after appearing in the movie 'Slasher Party' as Brittany in 2019. Then, after a year, she appeared in the movie A*S clowns: Constiparted as Annie. It also speculated that Kinsey's romance with the social media sensation gave a boost to her popularity.

With over 3.7 million followers on Instagram, Wolanski gives a view of her sultry swimsuit snapshots, pranks as well as daily dips in the swimming pool. Talking about the primary source of earning, the beauty accumulates a chunk of money from her swimsuit modeling and as a brand ambassador of BangEnergy.