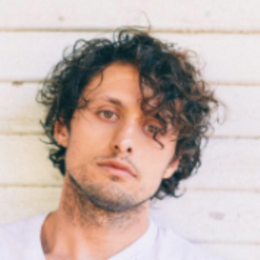 Michael Vlamis is an actor, director, and screenwriter best known for starring Michael Guerin, an alien, in the fourth season of Roswell: New Mexico. He has made a breakthrough directional debut in the psychological thriller Crossword. Michael stepped into the entertainment field in 2009.

Michael Vlamis has never been married. He has been dating a fellow actor Aurora Perrineau since March 31, 2020. The lovebirds marked their second anniversary on March 31, 2022. 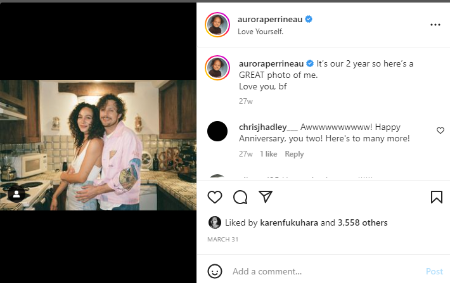 Further, Michael uploaded his initial picture with his lady love on Instagram on June 30, 2020. In the photo, Vlamis was holding onto her, and he read, "Holding on for dear life!"In another post, Vlamis announced that they officially got together on March 30, 2020.

In the post, Michael wrote, "From the moment Aurora bounced off the curb holding two mason jars filled with tequila, I was in trouble."  Aurora is funny, effortlessly cool, charming, and intelligent so does her partner, who makes horrible dad jokes for two hours straight.

The Vlamis-Perrineau duo has similar personalities and passion, which let their relationship last long. Michael Vlamis has not become a dad to a biological child but considers his brown pitbull his young one. It seems like the couple adopted a dog in March 2021.

Who is Aurora Perrineau? What Does She Do For A Living?

Aurora Perrineau has been acting for many years. She started her career in 2011, playing the character of Bianca in "Pretty Little Liars." But now, the curly-haired has become famous for starring Shana in the 2015 movie Jem and the Holograms. 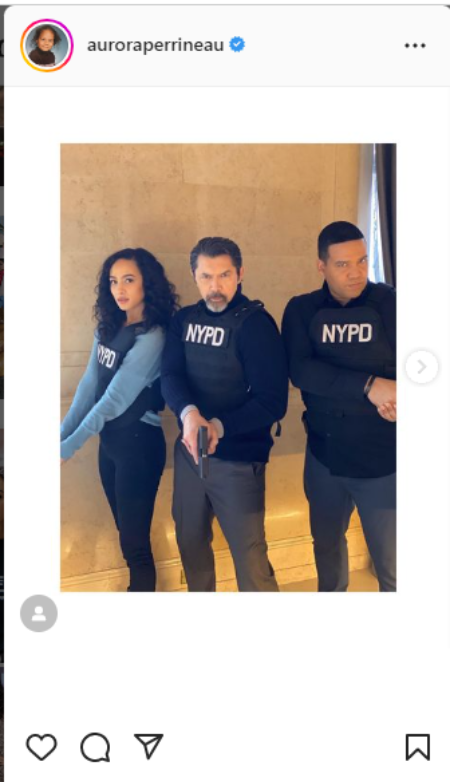 Currently, Aurora is portraying Dani Powell on Fox Series Prodigal Son. Perrineau belongs to well-known parents. Her dad Harold Perrineau is an actor best known for tv shows like Star, Claws, and The Rookie. As per IMDB, Harold got a role in a TV show, "From," which came out in 2022.

Likewise, Aurora's mother, Brittany, is a model who has added some acting credits to her name. She appeared in Lost and a few other films over the years, even though her last credit on IMDB is from 2008.

Check out the video of Michael Vlamis on one of the shows.

Also, Malex is the pair the fans fervently talk about when a new episode airs. Tyler Blackburn portrayed the gay partner of Michael Vlamis (Michael Guerin), who shared a passionate kiss in the pilot. And viewers have been shipping Malex.

The pair disappointed fans when Alex sank into the liminal space dimension and collapsed for multiple episodes. The action of Alex left fans to wonder whether the duo would end up happily ever after. Alex went missing for most of season four before reuniting with Michael in episode 11.

Alex proposed to Michael at the time before the two almost got married in a makeshift ceremony in the alternative alien universe. In September of 2022, when the series was in its final episode, Michael and Tyler discussed in an interview their characters' cosmic love story. It was like filming Michael-Alex's epic reunion, how they never visited Roswell's gay bar.

Michael Vlamis has summoned an estimated net worth of $3 million as of 2022. He receives thousands of dollars for signing each movie and tv show. Most recently, Emmy has nominated Vlamis as the best actor for his leading role in Rosswell, New Mexico. 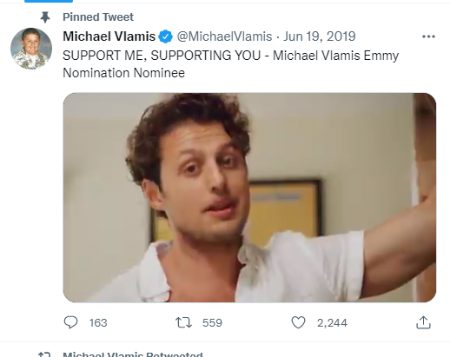 In addition to acting, Vlamis wrote, produced, and starred in MemE! True Hollywood Story. At the time, he was honored at the Tribeca Film festival in 2016. Michael's first feature film came out in 2019 when he produced and starred in "5 years apart" alongside Michelle Randolph, Ally Maki, and Chloe Bennet.

Moreover, Michael won the Best Ensemble Cast at the LA Indie Film Festival for his outstanding role. What's more, Vlamis had written a script for Blue Slide Park, which was a massive hit when it landed on the Blacklist. Grandview and CAA represented the brown-eyed.

Today Micael has 13.7k followers. Aurora Perrineau has 68k followers on Instagram, in which she mentioned herself as Taxidermist, a noncompos cowgirl, on her bio. Aurora has mentioned her involvement in the Innocence Project, Futures without violence, and Blackartistfund.

Additionally, Michael is one of three children to his Christian parents. The star has never tight-lipped about his mother's identity. Neither has he discussed anything about his educational background.

Nonetheless, Vlamis attended a local secondary school in the United States. He graduated from Chapman University with a bachelor of science degree in entrepreneurship. The 32-year-old had a keen interest in acting from an early age. So to pursue an acting career, Michael has probably taken classes at the theatre.

Vlamis has a captivating body structure with a height of 5 feet 11 inches and weighs 65 kg. Besides, he has curly brown hair and hazel eyes.

Michael was pretty much fat at a young age. He was around 80 kg. But as the year passed by, Vlamis decided to change his look.