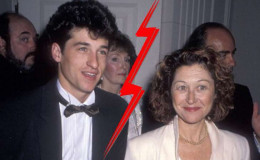 Hollywood heartthrob actor 'Patrick Demsey' is happily married with 'Jillian Fink' after divorcing his first wife. He has wonderful career with amazing net worth.

If you are one of the biggest fans of Grey’s anatomy than you must be familiar with Dr. Derek Shepherd character which is portrayed by Patrick Dempsey, the one who won our heart through his marvelous acting and charismatic personality.

Patrick is known as the most handsome and talented artist whose fans following are millions in number. Being one of the most sensational superstars of Hollywood, his fans are always curious to be updated with his life, especially his personal stuff.

Talking about his personal life after divorcing his fist wife ‘Rocky Parker’, Patrick is living blissful married life with his second wife ‘Jillian Fink’ and if you want to know more about him than read out our article.

In 1994 Patrick Dimpsey first met his now wife 'Jillian Fink' in Los Angeles where she runs her own hair salon as she is one of the professional hair and makeup artist.

"When I saw his name first time in the appointment book, I thought it was a prank by one of my employee but later when he actually came; I was shocked."

"At the same time, I was happy too because I'm his one of the fan and he was so cute."

According to Patrick, Jillian didn't treat him like a star, she normally behaves as she did with her other customer and this attitude of her made him fall for her.

Well, after dating for 5 years the duo decided to convert their relationship into a marriage. So, on July 31, 1999, they exchanged vows.

According to the source, their wedding was a private ceremony where only close friends and family members were invited.

The couple is together since last 17 years. However, in 2015 news came out that Patrick and Jillian were having difficulties in their marriage.

Even Jillian filed for a divorce and their relationship was at the point of ending but all thanks to Patrick because of his effort and love he succeeds to save his marriage and duo called off their divorce.

In an interview with Entertainment Tonight, he said,

"The support my wife has given me has allowed us to blossom as a couple and a family. Without her, my career would not be where it is today. My heart told me [not to give up]."

"I want to set an example for my kids so, I can't let go my relationship so easily."

Today they are living their blissful married life with their children and there aren't any rumors regarding their split or extra-marital affairs.

Before having Jillian in his life, Dempsey was married to a much older woman. He married his best friend's mom 'Rocky Parker' who is 27 years older than him.

At the time of the wedding, he was just 21 years and Rocky was 48 years.

However, due to the huge age gap differences, their relationship couldn't last long as a result in 1994 they ended their 6 years relationship in divorce.

Their divorce was most controversial divorce at that time. Patrick has an allegation for attacking Rocky because he wanted to see what it was like to beat up a woman.

According to The sun on Sunday, "The Bridget Jones' Baby star was accused of physically abusing his first wife whilst on the set of his movie, "Can't Buy Me Love (1987)."

Rocky who was passed at the age of 74-year-old due to throat and lung cancer used to claimed that she helped Patrick to get off drugs and alcohol.

Patrick and Jillian were blessed with three children. On February 20, 2002, they welcomed their first child 'Talula Fyfe' and she is a beautiful daughter.

Patrick Dempsey with his family
Source: life and style

Later on February 1, 2007, they were again blessed with two sons 'Sullivan Patrick' and 'DarbyGalen'. Patrick seems to be a very good father as he teaches his kids how to cook as well as he spends time in coaching his son's football team.

The couple is ready to welcome their baby no.4. According to the Life & style,

"They are pursuing all options including a surrogate or adoption and they're really excited about it. Even they're in talks with a lawyer to help navigate the complicated adoption system."

We wish their dreams of having a fourth child comes true.

Patrick Dempsey started his acting career through the movie 'In the Mood' at the age of 21 years old. Prior, casting in movies he was involved in stage shows.

He has worked in many superhit movies and TV shows but Grey's Anatomy helped him to gain much popularity though today he isn't part of the show.

He is very passionate about car racing. He has a collection of extensive sports and vintage cars. Even he participate in many competitions and won too.

Patrick is one of the highest paid actors in Hollywood who has a net worth of $60 million dollars; he owns many expensive properties and cars which marked him one of the richest actors.

At last, we want to wish him all the best for his upcoming projects and we hope Patrick will always be happy with his family and children.