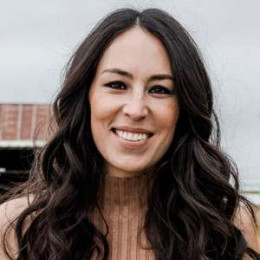 Joanna Gaines is a well-known journalist widely popular as the host of HGTV's Fixer Upper alongside her husband, Chip Gaines. As owners of Magnolia Homes in Waco, Texas, she has been flipping, remodeling and fixing up homes along with her partner for more than a decade.

A prominent face of the television world, Joanna Gaines is the daughter of Jerry Stevens. She was born on 19th April 1978, in Kansas, United States. She grew up in Texas and spent most of her childhood days there. She belongs to the mixed ethnicity and holds an American nationality.

Her parents met in South Korea, before moving to Kansas. Joanna's father is half Lebanese and half German, and her mother is Korean. 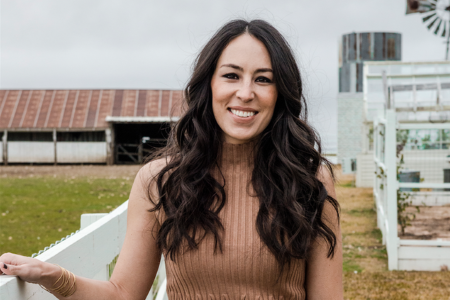 In an interview with Darling Magazine in March 2018, Joanna revealed struggles with insecurity and being bullied for being an Asian during her childhood. She was not as confident as she is now and being bullied constantly was the main reason for it.

If you haven’t heard my story, my mom is full Korean and my dad is Caucasian. Kids in kindergarten would make fun of me for being Asian and when you’re that age you don’t know really how to process that; the way you take that is, ‘Who I am isn’t good enough.’

Things got easier for her when she moved to Texas with her parents.

I discovered that my purpose was to help people who are insecure because I didn’t like the way it made me feel, in that stall; that’s not who I am

In the starting of her career, Gaines interned at CBS News in New York City. Till now she has worked on 100 homes combining with her husband.

Joanna Gaines' interest in remodeling houses encouraged her to pursue her career in the construction field. Later, she met her husband with the same passion and started running a reality television series Fixer Upper which was telecast on HGTV.

Prior to Fixer Upper, Joanna used to work in an all you can eat buffet named Magnolia Homes, and now the buffet is owned by the duo.

Chip has always talked about the @balloonfiesta and how he went as a little kid growing up in Albuquerque. He surprised us all this weekend and we finally got to experience the magic of this special place. Now I get why he still talks about it forty some years later

Joanna and her husband together launched a product called Hearth and Hand line with Magnolia Brand. The brand went on sale on November 04, 2017.

The collection includes more than 300 items. It includes throwing pillows, tote bags, gift wrap, and vases & drinkware matching to family pajamas sets. Most of the items range under $30.

Recently in November 2018, on the Jimmy Fallon show, the duo announced that they are partnering with HGTV parent discovery on a new network which will be starting in the next 12 to 18 months. The show will be filmed mostly in Waco, Texas and together they plan on making a different platform which is both family-friendly and inspiring.

Joanna Gaines' Net worth And Salary

To answer the question, how much is the net worth of Chip and Joanna Gaines-well it is not less than a seven-digit figure. The couple has earned a big chunk of the net worth from their hit program, Fixer Upper, as it earns $30,000 per episode including the unrevealed salary from HGTV.

Gaines has a total net worth of $8 million. The couple has worked on more than 100 homes. The people who purchase their homes have a budget of around $200,000 and are willing to pay $30,000 for renovations.

Similarly, the Magnolia umbrella adds a huge fortune to their net worth: Mongolia Homes is Joanna and Chips's renovation business; Magnolia Realty is their real estate agency selling houses in the cities like Fort Worth, Houston, Waco, Austin, Dallas, and San Antonio.

The duo also owns Magnolia Journal which is a quarterly magazine with more than 700,000 subscribers paying $20 per year; Magnolia Silos, a boutique deals with selling food truck-cuisine and home decor. Adding to the list, Magnolia House, a vacation home which charges $600 a night.

Besides recently in November 2018 they purchased a run-down house for $12,500 and remodeled it into their show's executive producer Michael Matsumoto's dream house. The house has the concept of an open kitchen with seven bathrooms and four bedrooms which is available for rent.

Joanna is a married woman and has five children. She tied the knot with her longtime boyfriend, Chip Gaines. She met Chip at her dad's Firestone store. After dating a year, they turned their relationship into a marriage. Their marriage was solemnized amidst a small ceremony with the presence of their family and friends.

The well-known businesswoman and reality TV star married Chip Gaines in 2003. Her husband is a businessman and her on-screen partner. They both attended the same University but did not meet there. 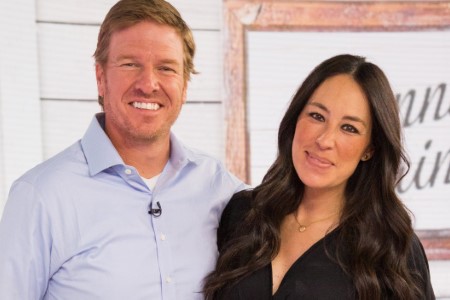 The duo owned and operate the remodeling, and design business Magnolia Homes where Joanna served as the lead designer for the company. Moreover, Joanna and her husband are the hosts of HGTV’s program named Fixer Upper.

This lovely couple has five children, Emmie Gaines, Duke Gaines, Ella Gaines, Drake Gaines, and Crew Gaines. Chip and Joanna welcomed a fifth baby on June 23, 2018. The mother took it to Instagram to reveal the name of the son as well as the first pictures of the baby.

Our baby boy, Crew Gaines, is here and we couldn’t be more in love. He made an unexpected (and speedy) entrance into the world two and a half weeks early - which is fitting given he was a sweet surprise from day one. Thank you for all your thoughts and prayers. We are so grateful.

Chip shared an Instagram image of his fifth child on 21 January 2019 to grace the family's Instagram feed. The image captioned,

"Chip off the old block."

Chip off the old block

In a recent interview, the reality star revealed she and her husband woke up early in the morning. She said,

'Chip will be up at three and I’ll hear him rustling around, so then by 4 am we’re sitting on the couch having coffee.'

Gaines further added, her 9-month-old son, Crew also act as their alarm clock. Recently in 2019, she also posted a video of her youngest child walking around her house.

Her children have made several appearances on the show. While she was pregnant with her fifth baby, her two sons, Drake and Duke appeared on the show helping their mother. Similarly, their youngest daughter Emmie Kay made her cameo appearance on Fixer Upper in March 2018 where she was seen helping her father on a big project.

All my dreams have come true

Joanna Gaines tries her best to balance her life as a mother, designer, and entrepreneur. The family makes the best of everything and for 2018's Christmas they bought a 13-foot Christmas tree.

Back in the days, when the duo became the parents for the first time, Joanna freaked out after Chip left their oldest son alone when he was only six weeks.

Apart, Gaines is active on social media and has a great fan following. As of 2019, her account has more than 11 million followers.

Meaning Behind The Appealing Name Crew

The couple swayed away from their tradition of giving baby boys names that start with the letter D and opted for a C name. This is likely in honor of Chip. Earlier, Joanna revealed during her pregnancy:

Meanwhile, the baby name Crew, while being unique, is rising in the ranks of popularity over the past few decades. And it turns out Chip and Joanna have tapped into two different baby-naming trends when deciding on Crew.

The crew is related to the Latin word accrue, which means increase or growth. This enhances even more positivity towards an already appealing name. It is also kind of apt for the growing Gaines family.

The name Crew was gaining popularity among many baby girls in 2017 as it is not traditionally gendered. However, it is predominantly used for boys.

Strong Bond Between The Couple

Till now none of them has reported being involved in any kind of extramarital affairs. The news of the couple getting separated is out of a picture, and looking at their good bond it is unlikely in the future as well.

By preserving and highlighting the character of each home, Joanna keeps things original and one of a kind. Her passion is to create functional rooms that inspire and encourage others to own their space.

Check out the video of Joanna Gaines and Chip Gaines where they talked about why they’re ending Fixer Upper.

Even Chip and his wife have some tense moments in their married life. Chip opened up about how the 15-year of their marriage is going on and how his wife helps and supports him to keep him in line.

During an interview with Cowboys & Indians, he explained the scenario,

"When either of us is off the tracks or kind of lost our minds in one way or the other, you know, a little look, a little side eye certainly goes a long way for sure. And she's got a nasty one. She's scary."

Furthermore, he explained their relationship,

"Jo and I know each other; we have always been really good to each other. We believe that part of the magic in our marriage is just the simple fact that we care sincerely about one another."

The couple may welcome their sixth child in the family soon. He joked about the possibility if their sixth baby back in October 2018.

Reality star Joanna Gaines stands at a height of 5ft 7inches and her weight is 55kg. Her body figure measurement is 32-26-35 and her bra size is 32B. Her hair and eye color is blue hair. The size of her dress is 4(US).

He is also an owner of Magnolia Homes in Waco alongside his wife. They have already crossed more than a decade of successful marriage relationship. Together they are parents of four children.

He is the first son of the family. He is very handsome.

She is a very beautiful child. She resembles her mother more.

He is the third children of the family. His picture along with family can be found in different sites.

She is the youngest daughter of the family. She is a very healthy kid.