Home Article 'New York Giants' Running Back Saquon Barkley Has A Child With His Girlfriend Anna Congdon; Know In Details Of Their Relationship

'New York Giants' Running Back Saquon Barkley Has A Child With His Girlfriend Anna Congdon; Know In Details Of Their Relationship 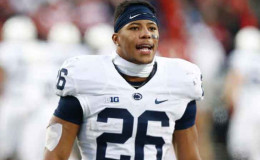 It's known to all that family plays a key role in building up one's career. American football running back for the New York Giants Saquon Barkley's parents has a great impact on his successful career. Overcoming every obstacle, they have done their best to mould him what is he now.

It's known to all that family plays a key role in building up one's career. American football running back for the New York Giants Saquon Barkley's parents has a great impact on his successful career. Overcoming every obstacle, they have done their best to mould him what is he now.

Not only his parents he's received love and support from his girlfriend Anna Congdon. The couple welcomed their first daughter in April 2018. Here's every detail you people wanna know about the sports star:

Barkley, 21 and his lovely partner celebrated their first anniversary in January 2018. 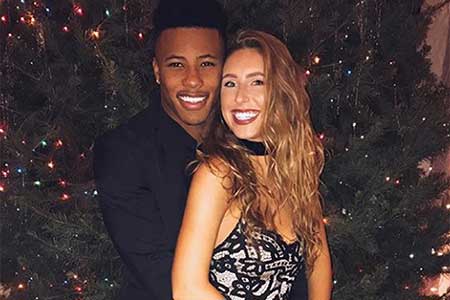 "One year with my king! who would’ve known that acting a little crazy on this day would lead to the start of what we have!! you have taught me so much in such a short period of time. thank you for your wisdom, patience & understanding–you are truly one of a kind. your love is never taken for granted."

"Thankful for this past year with you!! Love you ?."

The couple has every possible reason to celebrate their lovely relationship. It's a good thing for their fans that their bonding is never hidden from the fans and media. Here's an Instagram post of the star:

Happy birthday babe! Jada got the best role model as a mother ????

The picture-perfect couple has given perfect relationship goals for everyone on earth.

We wish to see the two getting married soon in the upcoming days.

April 2018 is a big month for Barkley as he received big success both in his professional and personal life the same month.

His girlfriend Congdon gave birth to an adorable baby girl Jada Clare Barkley on 24th April 2018 just two days before he was selected in the 2018 NFL draft.

Words can’t even describe how I feel right now. You are the most beautiful thing I’ve ever seen in my life. Thank God for blessing me with you in my life and into my arms. I pray that I can be the best father to you and help you grow into an amazing woman. I love you so so so much #DaddysLittleGirl Jada Clare Barkley 4.24.18 ??

He mentioned that he was so excited about the newborn that added extra motivation as he headed to the NFL. He said,

"It’s awesome. I’m excited. I’m not sure of the gender, that’s going to be a surprise, but April’s going to be a big month for me. Some people aren’t even blessed with the opportunity to have kids, and I’m able to have one, and I’m truly excited to be a father."

Soon after welcoming their daughter he stated that his former Penn State teammate, Marcus Allen will be baby's godfather.

Being a father, he admitted that he's more responsibilities and bigger roles. He told Penn Live,

"Now, you have to take more of a bigger role, be more responsible. Now, you’re not just training for yourself and training to be great; this is how you provide for your family, and you also have to look at football from the business side. Obviously, you want to play the sport and have fun with it, but now it’s bigger than you, you have a family to provide for, and I’m super excited and everything I’m doing is for myself and my kid."

After being drafted by the New York Giants with the second overall pick in the 2018 NFL draft, he signed a four-year deal of $31.2 million with $20.76 million guaranteed and $15 million bonus. 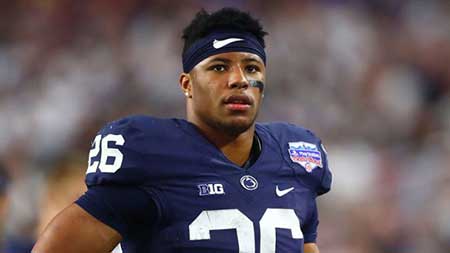