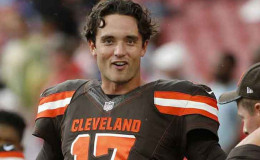 A couple who is genuinely interested in being an influential part of each other's lives tends to be in for the long haul. This is largely relatable to Brock Osweiler and Erin Osweiler who strive to do their best to ensure their partner achieves success in everything he/she sets out to do.

A couple who is genuinely interested in being an influential part of each other's lives tends to be in for the long haul. This is largely relatable to Brock Osweiler and Erin Osweiler who strive to do their best to ensure their partner achieves success in everything he/she sets out to do.

Let's get more details about the blissful married life of this adorable duo as well as their effort to make positive contributions to the community.

Brock Osweiler is married to his wife Erin Costales (now Erin Osweiler). The couple shared their wedding vows in February 2015. The wedding was held at the Silverleaf Club in Scottsdale in front of 120 guests. It was reported the rain nearly washed out the ceremony and a tent came in handy to keep everyone dry. 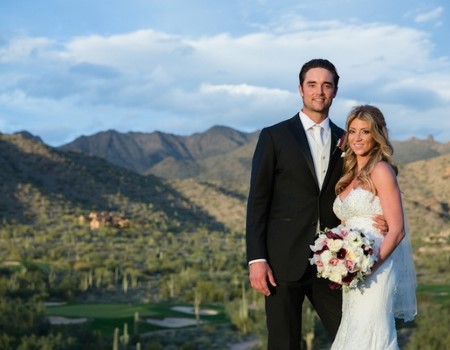 Brock Osweiler and Erin Osweiler during their wedding
Source: Inside Weddings

Earlier, the pair first met through mutual friends and they began dating soon after. They were living in Scottdale when Brock popped the question and proposed her.

On 20th December 2016, TMZ reported Brock and Erin were expecting their first child, a baby girl, in April 2017. The couple welcomed their daughter in the following year on 9th April 2017 named Blake Everly Osweiler.

Brock took to Instagram to express the sheer delight of welcoming a brand new member to the family. He wrote:

"And then there was 3...Welcome to the world, Blake Everly."

And then there was 3...Welcome to the world Blake Everly.

It remains to be seen when this lovely duo plans to further expand their already beautiful family. In the meantime, the family of three couldn't look more adorable together.

Earlier, in 2016 when Osweiler signed a huge deal with Houston Texans after spending three years at Denver Broncos, the pressure was on for him as he had less than six months to learn the Texans offense.

His wife Erin made things easier for the Quarterback as she helped Brock learn the language of the playbook. After Brock gained a basic idea of the book, Erin would then act as a coordinator and read entire plays straight out of the book.

Brock would then try to visualize the play diagram and try his best to perfectly repeat the complex plays. This is something the couple claims they were doing since Brock's early days in Denver.

Besides the fun and games, the pair was once involved in an incident outside a Pizzeria in March 2017. The couple bumped into some haters in Scottsdale.

After being confronted outside a Pizza shop, Brock pushed a woman who was moving aggressively towards his wife. The scene got tense and Osweiler with a calmer head guided his wife and friends into a cab as the bystanders began shouting.

Unfortunately for the NFL star, TMZ was in hand to capture the footage. The scene did not escalate further and off-duty cops at the scene confirmed no crimes were committed.

Luckily for Osweiler, the incident did not end up hurting his status and merely three days later he signed a contract with Houston Texans worth a whopping $82 million.

Ben Osweiler appears really fond of visiting children's hospital. He has done so throughout his NFL career. Both Ben and Erin free up their schedule to visit sick children in hospitals.

During the Quarterback's time at Denver, he spent his Christmas in a hospital named Rocky Mountain Hospital for Children. After joining Texans, he began visiting Houston Children's Hospital.

From our family to yours, Merry Christmas! Erin and I have always viewed this special day as an incredible opportunity to reflect upon the year and count our blessings and do what we can to give back. This year is extra special, now that Blake Everly is with us. We hope you all have a wonderful day and take the time to be thankful for what you do have. Erin and I also want to give a special thank you to the amazing group of people that helped us plan our day with Rocky Mountain Children's Hospital. Merry Christmas!! #positiveliving

Osweiler was named a Community MVP by the NFLPA in 2014. While receiving the award, Osweiler talked about the need for the NFL players to impact the communities positively. He further stated he uses Mondays to "pay it forward". The NFL star said:

“Playing in the NFL, I’m essentially living out my dream every single day, and I’m so fortunate for so many great things. To be able to be in a situation to give back just a little bit is something that means a lot to me."

"I think there is a great responsibility for NFL players to do that. It’s been a great deal so far."

There's no doubt Brock Osweiler is an amazing human being as much as he is a caring father and a brilliant husband. 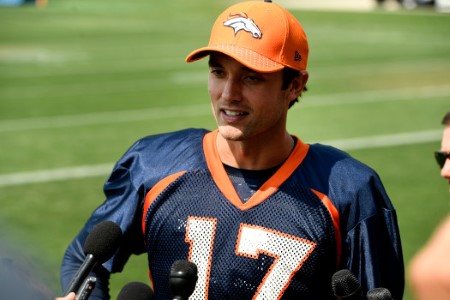