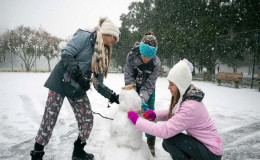 2700 Flights Canceled And Nine Deaths Reported After Rare Snowfall and "Bomb Cyclone" in South East.'Bomb cyclone' is expected to be the region's most intense winter hurricane.

Floridians are perhaps having some dream times this winter as Florida experiences snowfall after around three decades, but it seems their happiness is turning to misery.

The weather service has warned that the snowfall is continuing for few more days and it could soon strengthen into a ''bomb cyclone'' as it rolls up the East Coast which may come along with hurricane-force winds, coastal flooding and up to a foot of snow. 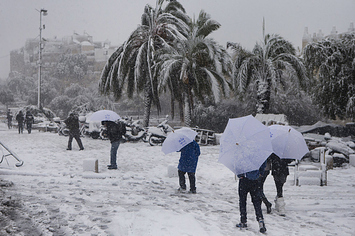 In around 2,700 flights scheduled for Thursday have been canceled by the airlines following the historic snowfall in Southern USA. Most of the delayed flights were scheduled to depart at some of the large Northeast airports, including Logan, LaGuardia, and JFK.

Speaking to ABC, one visitor from Washington DC told, "It's pretty wild. I've never seen palm trees with snow on them before."

Forecasters have to say that the snowfall might be heavy on Thursday in New England. Moreover, the classes at Boston Public Schools have been canceled for the day.

The Tallahassee police took to their Twitter to caution the public to drive safely as the roads were slippery.

It’s snowing in Tallahassee! As exciting as this is, please use extreme caution if you are driving & don’t expose yourself to the cold for too long without proper gear. #SunshineState #SnowDay #WinterIsHere pic.twitter.com/QVnnCTWQ5E

The United States is on the 10th consecutive days of frigid temperature (since Christmas), which in itself is a record. At least 17 people are believed dead due to cold in past few days across the country.

Meanwhile, the Michigan Police said that a 96-year-old homeless woman, who was recently diagnosed with dementia, was found dead in a playground. The woman was found frozen to death after wandering outside in a robe and slippers.