Manager Joe Maddon is married twice and is currently married to Jaye Sousoures. He has two children from his first wife Betty Maddon. He is a grandpa of five grandchildren. Know about his personal life.

The famous manager of American baseball Chicago Cubs, Joe Maddon is known to be one of the best coaches around America.

Married twice in his life, Joe is now living a blissful life with his beloved wife Jaye Sousoures. Does he share any children with her? Let's dig deep into his personal life.

Chicago Cubs Manager Joe Maddon Married For A Long Time Now; Does He Have Children?

Joe Maddon is married two times in his life and is currently married to wife Jaye Sousoures.

The couple met in 1995 at Seal Beach's Rossmoore Athletic Club in California. They were both married at the time when they first met. Joe was the father of two with his first wife and Jaye was also a mother of two with her previous husband. 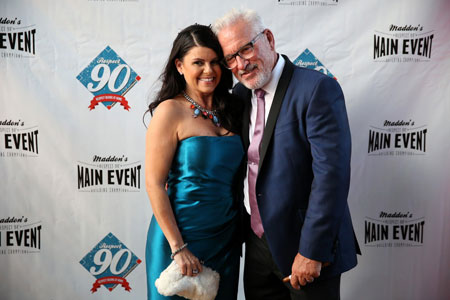 Joe with his wife Jaye on the red carpet
Source: ChicagoTribune

The pair remained friends for almost half a decade until both their marriages ended. It is even said that friendship does not take long to turn into a romantic affair if truly attached.

The same happened here for the friends, Joe and Jaye started dating in 2004, got engaged in 2007 and eventually became life partners in 2008.

"She's got a great laugh. And I can make her laugh, which is very important, We always have a blast."

The duo shares no children till now as they already have children from their previous marriages.

Talking about his previous marriage, he was married to Betty Maddon. The two tied the knot in 1981. The couple shares two children, a daughter Sarah Bystry and a son Joseph Maddon III. 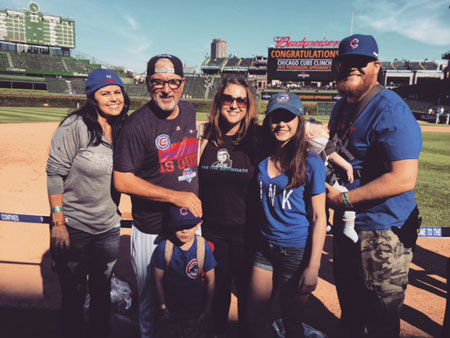 Joe with his son, daughter, and grandchildren on the field
Source: DNAInfo

Sarah and Joseph have already managed to make Joe a granddad. Sarah is married to Theo Bystry the duo are proud parents of their three children, Tyler Bystry, Tre Bystry, and Carson Bystry. Joseph, on the other hand, is married to Natalie who shares two children, Coral Maddon and Giuseppe Maddon.

Joe is very happy to be a grandpa and is together on several occasions sharing pictures on their social media. He even shared a picture of his grandkid on twitter captioning, “How about my granddaughter Coral starting her modeling career!”.

How bout my granddaughter Coral starting her modeling career ! pic.twitter.com/k5DbTKKCVG

The manager is now living a blissful life with his lovely wife and let us hope to hear some good news in near future.

Joe used to play in Minor League Baseball as a catcher and by signing with the California Angels as a free agent in 1975. For 31 years, he worked in the Angels organization which included working as a minor league manager, scout, and coaching for the major league teams.

Maddon initially wanted to be a catcher for Los Angeles. Interestingly, life had a different plan for Joe. However, as his attempts failed, Maddon gave up and settled with being a manager and coach. And, what a career did Mr. Maddon relished over the decades of his career in the Baseball field.

Well, throughout his career, Maddon served for Anaheim Angels, Tampa Bay Devil Rays / Rays, Chicago Cubs, and Los Angeles Angels. The recipient of World Series Champion and Manager of the Year also coached for Anaheim Angels before he began managing teams. And, as per Celebrity Net Worth, Joe Maddon bags a net worth of more than $12 million. 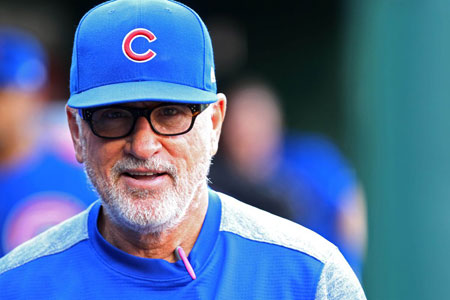