Home Article Actor Jimmy Fallon and his Wife Nancy Juvonen got Married in 2007. Know about his Children.

Actor Jimmy Fallon and his Wife Nancy Juvonen got Married in 2007. Know about his Children. 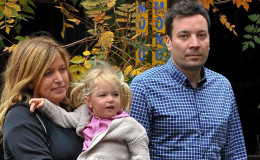 Jimmy Fallon is possibly the most famous personality in the American television. He married an established film producer Nancy Juvonen. Let's know about them a little more.

James Thomas, popularly known as Jimmy Fallon is an American comedian, singer, actor and on top of all a mind blowing television host. He hosts the late night show in Star World “The tonight show starring Jimmy Fallon” and hands down he is the best in the business.

He is married to a popular and talented film producer Nancy Juvonen in 2007 and has two children with her. So let's roll and find out whats new in their relationship.

His wife Nancy is a recognized film producer. Nancy has produced many movies for the big screens; some of them are Never Been Kissed, Charlie’s Angels, Duplex, Fever Pitch, and He’s Just Not That into You etc.

Both first met on the sets of Fever Pitch in 2005 but they only began dating in 2007 when Drew Barrymore invited him to a birthday party she planned for Nancy.

Soon after some months, Jimmy proposed Nancy beside sunset with a humongous engagement ring, indeed a well-organized surprise which every young girl craves for.

They got married in 2007, three months after the engagement and has been a strong couple since then. There were rumors that their marriage is

There were rumors that their marriage is going through a rough patch lately because of his excessive drinking problem.

However, despite all the news all over the internet, they have managed to lift their relationship even higher and stronger than ever and prove the world that they are still deeply in love with each other.

Jimmy and Nancy as the proud parents of two daughters

Jimmy and Nancy have two beautiful children from their blooming marriage. Both of them are adorable baby girls.

Their first child Winnie Rose Fallon was born in 2013 and their second daughter is Frances Cole who was born in the year 2014.

Both looked breathtakingly cute and adorable in a recent outing day with mommy Nancy and daddy Jimmy.

Thank you to the nicest people at Serendipity 3!!! Starting a new family tradition. #FrozenHotChocolate

A cute family picture in social media is mandatory. Fallon is a wonderful father and he is proving it to everyone with his cute actions towards his adorable daughters.

There are many other similar shows but Jimmy made it effortless. It feels that comedy runs through his veins.

Loved by everyone jimmy started his career by working as one of the cast members inside “Saturday Night Live” slowly evolving himself as a celebrity.

Fallon returned to the televisions after trying out his luck in the big screens. He appeared in the movies like taxi and Fever Pitch in 2005.

He started his own television show “Late Night with Jimmy Fallon” in 2009 and later changed it to “The tonight show”.

Apart from that, he has already published three books and a two comedy album independently. He is perfect at everything he does and is surely an inspiration for all of us.