Home Article Actor William Levy and Elizabeth Gutierrez are living happily with their two children. Are they getting married?

Actor William Levy and Elizabeth Gutierrez are living happily with their two children. Are they getting married? 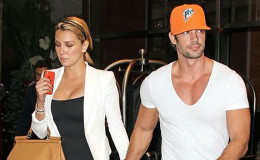 We all know about the relationship of Elizabeth Gutierrez and William Levy. The hot couple is now together for more than 10 years. They have been engaged and has two children as well.

They both met on the reality show called "Protagonistas de novela 2" in 2003 and they are stuck with each other ever since. Like in every other relationship, their relationship also has faced many ups and down but William and Elizabeth have always stood up for each other which might the reason behind their successful partnership.

Dating story of the couple: William Levy and Elizabeth Gutierrez

The couple met for the first time on the set of 'Protagonistas de Novela 2' as the contestants and later they started dating each other.

They both have been engaged with each other for a very long time now and they might also get married very soon.

Did William Levy and Elizabeth Gutierrez have any previous affairs?

William Levy is known for his heart throbbing looks and the Cuban hunk has many female fan followings. Previously, he was having an affair with the former Miss Universe, Ximena Navarette.

However, both of them has always denied the rumors of them dating each other.

Because of rumors of William being involved with Ximena, the news came that he and Elizabeth have split up. And it was also confirmed by William himself.

William said, "Yes, we are separated, but not as a family and we also don't discard the opportunity to be together emotionally in the future, whether it's tomorrow, in a week, in a month or in a year."

Got back together, Stronger than ever

Likewise, a year later after making that statement the couple came back together after posting PDA on their Instagram account. Love is the most powerful feeling, Isn't It?

Elizabeth and William have a son and a daughter

Though the couple has not been married yet they have already started a family with two beautiful children. A son named Christopher Alexander (2006) and a beautiful daughter named Kailey Alexander (2010).

The couple has recently celebrated the 6th birthday of their darling daughter and has posted lots of pictures on their Instagram account.

When u wish he was your baby daddy!!!! Oh wait he is?? #youandme #noneedtoexplain #13andsome #noneedtowish @willevy

They also uploaded the picture of the birthday cake and various props as well.

As of now, there is no news of the couple getting married. Yet they are still going strong and it seems they are raising a good family.