Actress Alexa Vega and her husband Carlos Pena Jr. are expecting a baby 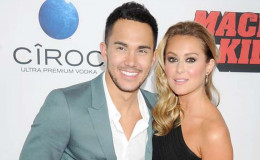 There is a huge surprise on the way for the fans of Alexa and Carlos Pena Vega as they are expecting their first child together. Yes, you heard it right! They are pregnant and are soon going to be proud parents!

The actor himself announced the news via Instagram. He posted the picture with a caption, "Breaking news! It's#ClearblueConfirmed! There is going to be a new cool kid in town… And by cool, I mean dorky just like their father".

'Spy kids' star Alexa and Nicklodean star Carlos Pena Vega got hitched on 4 Jan, 2014. However, it was not the first time for Alexa to walk down the aisle.

She was previously married to producer Sean Covel  for two years. Alexa was 22, and Covel was 34, when they got married but because of the relationship hurdles the two could not stand each other and eventually got divorced in July 2012.

It did not take long for Alexa to come out of her past relationship. Hence, she got married to Carlos two years later at the Grand Velas Riviera Nayarit in Puerto Vallarta, Mexico.

Her twitter post one day before and after her engagement reveals her excitement. The couple had previously planned to change their surname to PenaVega, an anamlagation to both their surnames.

The duo was in a relationship for two years and engaged a year before their marriage.

The couple announced the Baby's name and sex

Recently, the 27 year old actress posted the name and sex of her upcoming baby. Alexa, with her husband announced that they are going to have a baby boy!

The beautiful actress showed up an ultrasound pic of the baby with the caption of his name.

Alexa and Carlos Pena Vega showed up the baby bump at variety's 10 Latinos to watch Ceremony held at The London West Hollywood on September 28.

The so much in love couple are in the phase of excitement and happiness. Alexa puts it up on her instagram account that she just cannot wait to welcome the new little surprise.

Her continuous pregnancy posts on Instagram reveals how much she is enjoying her pregnancy. We wish her to have a heathly and a happy baby.