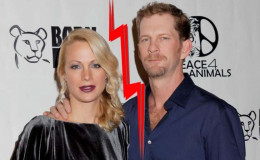 Daughter of Clint Eastwood, Actress Alison Eastwood is a living a happily married life with hubby Stacy Poitras after separating with Kirk Fox.

Alison Eastwood after divorcing Kirk Fox is married to Stacy Poitras. The actress was in a short-term marriage with Kirk.

After thirteen years of divorce with Fox, Alison tied the knot sculptor Stacy Poitras. The couple is said to have a good bonding together.

Alison Eastwood and Stacy Poitras were in a five-year relationship before they got hitched. The couple met at a bar in Agoura Hills California where Stacy has his own art studio.

It was a small ceremony where the two got married. It was in Calabasas California on the day March 15, 2013. According to People Magazine, the bride wore a 1930s style beaded gown by Las Habitudes.

Poitras said Celebuzz that he felt like he was the luckiest person to have an angel like Alison. He further added that they both are happy to be together.

Poitras asked with Clint for Alison's hand three years before at a Thanksgiving dinner in Pebble Beach. It was a polite purpose of Stacy to which Clint replied,"You better take that up with her " which meant a big  Yes!

When asked about their relation Stacy replied,

"Both Alison and I already refer to each other as husband and wife, because we feel we have such a strong spiritual bond between us and we want to celebrate that at our wedding."

The couple is currently busy in rescuing homeless animal with the Eastwood Ranch Foundation. Besides them, the entire Eastwood family is in support of their efforts.

Stacy is a sculptor by profession whereas Alison like her father is a Hollywood star. The couple has got no children.

Alison and Kirk married on 14 March 1999, after dating together for several months. It was rumored that they started having problems since the initial phase of their marriage.When the condition went worse, the couple officially separated

When the condition went worse, the couple officially separated in January 2000, just after 10 and half months of being together.

The actress did not spill any beans on her married life but in an interview with TMZ Kirk said he married Alison because she was the daughter of Clint Eastwood.

Alison Eastwood being the daughter of Hollywood Royalty has got into a number of relationships to find the perfect match.

She married Kirk Fox in 1999 but later on divorce him due to some issues. Alison was also engaged with John Vorzimer in 2008 and broke up in 2009.

Currently, she is in a healthy relationship with Stacy Poitras.They have been married for three years.