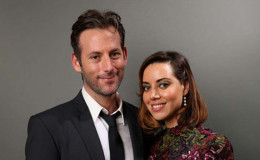 Aubrey Plaza is an American comedian and actress. She is in a relationship with filmmaker Jeff Baena. Aubrey has confirmed he relationship and talks about it with great humor.

Currently, there is a new buzz going around in Hollywood, and it is regarding the relationship between the 'To Do List' star Aubrey Plaza and screenwriter and director Jeff Baena.

Although the couple has not spoken properly about the matter, their growing closeness for each other has spoken a lot.

Aubrey Plaza could attract anyone with that sex appeal and charm. The 32-years-old actress and comedian came out as a bisexual in her funny way.

'The Safety not Guaranteed' star, when asked if she has ever been hit on by girls she replied;

“Oh yeah. I don’t mind. "I know I have an androgynous thing going on, and there’s something masculine about my energy. Girls are into me — that’s no secret. Hey! I’m into them too. I fall in love with guys and girls. I can’t help it”

It has been confirmed that she started dating screenwriter and film director Jeff Baena before they worked together in 'Life After Beth.'

Plaza admitted being in a very adorable relationship with the co-writer of 'I Heart Huckabees.' She said,

“He’s a creative person and we understand each other on that level."

"When we’re together we like hanging out at home. We’re happy having people over and playing Settlers of Catan or Battlestar Galactica. We’re kind of dorks.”

When Aubrey was asked to play the role of a zombie after she saw the script of 'Life after Death,' boyfriend Jeff Baena was very pessimistic.

He thought it would be strange to direct his girlfriend and that he was going to have awful breakdowns. Lucky for this couple, the making of the movie happened in a lot cooler way than they had expected it to be.

Dane DeHaan who plays the Plaza’s boyfriend in the movie was not hesitant but was expecting things to be awkward while filming the romantic scenes with the girlfriend of a director.

However as the real-life couple was really cool about it is only a movie project, things were not as awkward as they could have been.

DeHaan was sure that the shooting was going to be chill when Baena came to Aubrey and said,

“I really like that part where you suck his finger, can you do that more?”

So we can all agree with Aubrey and call her relationship “weird.” “Jeff asked me if I could get more into it. He said, “Like moan or just… get more into it?” she recalled to Nylon magazine’s October issue.

When their co-stars told them that they have a very weird relationship, she just agreed to it by saying,

“There’s something freeing about making out with someone in front of him and having him direct it. It’s kind of perverted in a way that I really like.”

She has opened up about her relationship by calling it old school and that they play games just because they’d be forced to sit around a table and talk.

She said that they are both very personal about their works and offer each other space to do their things before coming back to reality.

The couple who never fail to make each other laugh not only has a great sense of humor but is also very understanding and supportive of each other.  This relationship sounds like goals.