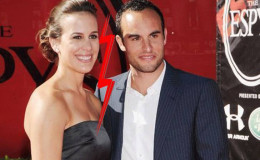 Manly seen on secondary roles, and famously known for her role as jennifer in CBS sitcom called "Rules of engagement" , Bianca's life has been nothing short of ups and downs.

Bianca have had  few relationships in her past. The famous TV star has dated many celebrities. One of them would be US National team player Landon Donovan. They married each other on 2006. But the marriage was shortlived as they divorced each other shortly afterwards their marriage. She then met Mike Catherwood on his radio show. They married shortly afterwards and the couples are having a good time.

Bianca was born in March 26, 1977 to a slovak father named Dr Aurel Jan Kajlich and to a italian descent mother named Patti. She generally plays supporting roles in movies and TV series. She is famously known for her role in CBS's show called 'Rules of Engagement' as Jennifer which aired from (2007-2013).

Marriage and Divorce with Landon Donovan

Donovan and Kajlich married on December 31 2006.

But they got separated in July 2009. Although it was said that the couples may have reconciled year later but the differences between them is too much. So Donovan made the divorce official a year later after showing the divorce papers.

It was said that the main reason for the couples to part ways was due to the incident about Landon having a child with another woman when he was playing for Everton on loan from LA Galaxy in United Kingdom.

But reports say that " Kajlich wasn't blindsided by this incident." Donovan also added that he will provide every bit of information to prove himself. Although the identity of the women is still unknown.

Mike is a co-host of the popular call-in radio show called Loveline. Mike and Bianca first met during an episode of Loveline in which Bianca was the guest. They told everyone about their relationship. The video clearly depicts that both Mike and Bianca are enjoying themselves.

Mike was even seen wearing Bianca's cardigan just for a gig. When asked why he was wearing the guest's cardigan he replied "I love this cardigan", Bianca who was sitting there was blushing and laughing at the same time.

Mike's previous marriage was ended on a divorce. They started dating and they both got married on December 16, 2012. Also known as Psycho Mike, Catherwood is an American Radio personality primarily known for his work on  KROOQ-FM on Kevin and Bean and most recently as the co-host of Loveline.

Mike was looking especially handsome on their weeding on a cool weekend weather. He was wearing a traditional black tuxedo while his bride wore a white jacket dress.

The couple welcomed their first child on April 2014.

They named her Magnolia Catherwood. Bianca now 39, was 37 at the time when she gave birth to her daughter.

Bianca often uploads picture of her family on Instagram which shows that they are very happy together. The couples are going strong and seems like they will forever.