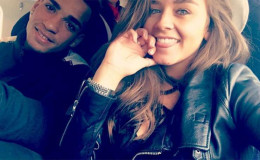 The end of a long-term relationship at the beginning of the year was a fresh start for Brooke Vincent after all.

Brooke split with her long term boyfriend in January 2016 but has found a new love for herself soon enough.

Brooke Vincent and Kean Bryan are in a relationship

Brooke Vincent and Kean Bryan were confirmed to be in a relationship from April, 2016.

Brooke, 24 is almost five years older than her new footballer boyfriend Kean Bryan who is just 19.

Kean is a 19-year-old rising star of the Manchester City Club. It is believed that Kean will become a player to watch in near future. Kean has been playing for Manchester City Football Club from the early age of 13.

Things seem to be getting pretty serious between the new couple as they were spotted together on a vacation to Spain.

Brooke posted a picture of her and boyfriend on the plane while they were  traveling to Spain. She captioned the picture with a line from the lyrics of Beyoncé's 'Dangerously in Love'.

It said, “You make the confusion go all away from this cold and mixed-up world…"

Brooke then posted the pictures and videos from her trip and said that Barcelona is her new favorite city and it has been a dream.

So, we can all be assured that Brooke had a great time with Kean and that all is well between the new couple. The couple seems to complete each other’s happiest moments.

Brooke shocked everyone by posting baby pictures on her Instagram and led everyone to think that she was pregnant with Kean.

Brooke later cleared the confusion by saying that she was only wishing her friends good luck for parenthood.

Brooke also said that she enjoyed putting on prosthetic belly bump for the theater production of 'Be My Baby'. She revealed that she actually got attached to the belly bump while playing her role.

Brooke sounds like she will definitely enjoy her motherhood.

Brooke was in 4 year-old relationship with yet another footballer Josh McEachran. Brooke and Josh met through a mutual friend when they were teenagers and began dating in May 2011.

Josh, 23 is a product of Chelsea Academy who currently plays for Brentford F.C. The two broken up more than once over the years but the couple finally ended it after they has to struggle with long distance.

Josh has to move from Stamford and schedule in Brentford while Brooke was filming in Manchester. The growing distance between them grew them apart.

Josh continued to text Brooke even after the breakup but Brooke has decided that it was the end for them as the long distance was too difficult.

However, both of them are in peace with each other and have decided to remain friends as they have known each other since when they were teenagers.

Brooke tried playing it cool in her new relationship

While the new couple started dating, Brooke was reported to have been worried about that fact that people might think that she only dates a footballer.

A source however, reported that the two are very sweet together and that they just click. We hope that they continue to find happiness in each other.