Home Article Actress Candice King and Joe Kingare got married in 2014. Know about their children

Actress Candice King and Joe Kingare got married in 2014. Know about their children 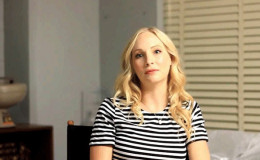 American actress Candice and singer Joe King married in 2014. They have three adorable kids. let's find out more about their personal life.

Candice Rene Accola is probably one of the hottest blonde actresses and a songwriter in Hollywood, Candice is now married to Joe King. The Vampire Dairy, actress' relationship is going strong as ever with husband Joe.

The already stepmom for two beautiful kids, Candice is now a mother of Joe's another child. let us find the gossips behind their fairytale like a love story and more about their children.

Who is Candice King?

Candice’s full name is Candice Rene King Accola. She has been gifted with so much of talent, she is one of a kind who can act, sing and write songs on her own.

She is widely known for her performance in the famous TV series ‘The Vampire Dairies’ in the role of Caroline Forbes.

Here is Candice's emotional talk about her career as her serial is going to end this season. Take a look!

She was born in Huston, Texas. Her mother was an Environmental Engineer before becoming a full-time homemaker and her father was Cardiothoracic Surgeon.

Her career is an interesting topic to look upon. She is famous for her incredible music and outstanding acting abilities.

King’s first album was released in the year 2006 titled ‘It's always the innocent ones’. It was her first as well as independent work which was quite commendable.

Some of her more admirable work can be seen in the ‘best of both worlds’ tour for the series Hannah Montana.

Candice has appeared in many TV series as a guest artist such as 'how I met your mother', 'Supernatural' and 'Drop dead diva'.

On the other hand, her husband Joe King who was born in Colorado is a famous guitarist and a songwriter who also co-founded the rock band named "The Fray".

Joe was married in his early 19s but later on got divorced with his first wife. However, they have two daughters prior to their divorce named Ava and Elise.

Candice began dating Joe when the two first met in the Super Bowl game in February in the year 2011. The then girlfriend-boyfriend duo was one of the hottest couples in Hollywood.

They used to hold hands and gave us the vibes of a fairytale romance when they appeared in public.

After a year they got married in a private wedding ceremony. The auspicious occasion for the two was in October 2014. Since then they have proved to be a perfect couple as husband and wife.

Joe along with her first wife has two daughters as mentioned above. After getting married to Candice she already became stepmother for two adorable kids.

The two made everyone even happier when they announced that they were expecting a baby although rumor hits that she was pregnant before their marriage.

Moving on, their first baby daughter was born this year on January 15. Both named her Florence May, she is going to turn one next month.

Isn't their daughter adorable? We wish to see Candice and Joe living happily for the rest of their life. For more latest gossips and news of the celebs, you can visit our sites.