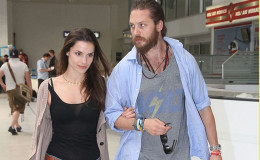 Charlotte is best known for her role in Edge of Tomorrow. She met her long time boyfriend Tom Hardy in 2014 and the couple seems to have a very good married life.

Charlotte Riley is an English actress known for her role in 'Edge of Tomorrow', 'In the Heart of the Sea' and 'Easy Virtue'. She is one of the most talented and gorgeous actresses and was also nominated for 'Best Actress' for 'Entity' in 2012 at the British Horror Film Festival Awards.

She married her boyfriend Tom Hardy, whom she dated for five years. The couple also welcomed their first child in October 2015. Let us find out some more details of this powerhouse couple.

Dating story of Charlotte and Tom

Charlotte and Tom met each other for the first time when they were cast in the movie called 'Wuthering Heights' in 2009. They started dating in 2009 and got engaged in 2010.

Blissful Marriage of Riley and Hardy

The couple then tied the knot in 2014 July and welcomed their first child in October 2015. They also have another child from Tom's previous relationship named, Louis Thomas Hardy.

The pair married in a very low-key manner inviting only the closest of their friends. It was said that they married on July 4 at the Chateau de Roussan in the South of France.

While shooting for her movie 'Close to the Enemy', Riley was five months pregnant with her child. The couple yet has not revealed the name nor the gender of their child.

Prior to Riley, Tom has had few relationships. In 1999, Tom married Sarah Ward who was a producer but the marriage ended in divorce due to Hardy's addiction to alcohol and cocaine.

Similarly,  from 2003 to 2004 Hardy dated a Korean-American Actress Linda Park. He also has a son with then girlfriend Rachael Speed.

The couple is very much in love. Currently, they are staying with their two children and two dogs. Charlotte often makes funny remarks about her husband.

Take this incident for example when she said her husband is good in bed. Apparently, it means Tom is good at making the bed.

Riley always uploads the picture of her with Tom that shows how much the couple is enjoying their married life. Their relationship is going strong and we wish them to be happy for the rest of their life.