Home Article Actress Dakota Fanning broke up with the boyfriend Jamie Strachan. Is she dating anyone?

Actress Dakota Fanning broke up with the boyfriend Jamie Strachan. Is she dating anyone? 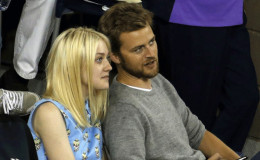 Recently, the Tinseltown and it's people went crazy over a hot and juicy gossip about  the splitting up of The Twilight Saga, starred Dakota Fanning and her British boyfriend Jamie Strachan. Yes, it's true!

Also, rumors of Dakota, seeing another mystery man is also swirling up on the media and her fans are really confused about this matter. So to clear the air, we'll provide you all the secrets this young heartthrob has been hiding. Let's find out!

Actress Dakota and Jamie are no longer together

'The Screen Actors Guild Award' winner Dakota, has officially broken up with her boyfriend Jamie Strachan of three years, as reported by our sources. The duo couple has not been seen together recently which signifies that they are no longer together.

The duo has not been seen together recently which signifies that they are no longer together.

The beautiful 22-year-old dated the handsome British model Jamie, who is 10 years older than her during the September of 2013.

The pair first announced their romantic hitch during 2013 when they were photographed by the paparazzi while they were holding hands together and blushing.

However, after two years of being romantically involved, both of them have decided to part ways and the reason behind their break up has not been revealed yet.

In an interview with Town & Country, Dakota shared her feelings about dating and told the sources how "horrific" it was after confirming her split up. She quoted:

"I find dates, in general, horrific. We have to sit there and ask these questions and pretend to eat a meal and it just feels so stiff."

When asked further details about their break-up, Dakota didn't share anything and instead explained that she's never raised in such ways where you share too much of one's personal life with the public.

“I was raised by very traditional Southern parents with Southern manners," she tells the US magazine. "You don't air your dirty laundry to people that aren't your family or your friends.”

Dakota spotted getting close with a mystery man

Although Dakota seemed to be enjoying her single life, busy with her next movie projects and shoots, it seems she has already found someone special in her life.

Recently, Dakota was spotted with a handsome young man and the pair was hugging and getting really comfy with each other, reports People.Com.

The 22-year-old was seen hanging  outside a warehouse rave in Downtown Los Angeles. After a long, good chat, the pair were seen hugging and smooching each other leaving all of us curious. Who actually is that man??

What is Dakota up to lately?

IN. THEATERS. NOW. I've been shameless on the gram for this film, because I believe in it so much. I am so proud to be in it. @americanpastoral

Being fancy last night in NYC. ?? @americanpastoral this Friday!

Also, sources reported that Fanning has also joined the cast of  Ocean's Eight, which is set to be released in 2018.

Here's a video of a gorgeous actress Dakota Fanning and more on the red carpet at the Venice Biennale Film Festival 2016, the actress is in the town to present her new movie, Brimstone by Martin Koolhoven.

Well, all in all, we really hope that Dakota finally reveals who her "mystery man" is and if situation favors then they might get married too.