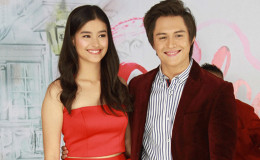 The very young and gorgeous Filipino-American actress and model Liza Soberano is confirmed to be in a relationship with co-actor Enrique Gil.

The couple who looked adorable onscreen has finally opened up about dating each other.

Enrique Gil and Liza Soberano made everyone talk about them after their undeniable on-screen chemistry. The pair looked so good on-screen that the fans have been shipping for them ever since.

The couple also developed feelings for each other during the shoot of romantic comedy series. Liza, who is 6 years younger than the 24-year-old actor was only 16 years old when the show released.

There is no denying that the teenage heartthrob Enrique is a hopeless romantic. Any girl could easily be charmed by him and Liza Soberano came as no exception.

In an interview in the 'Tonight with Boy Abunda', the actor was asked three questions related to his love life by the show host, Tito Boy.

The first question he was asked was how he would react if one morning he was told that Liza was getting married to someone else.

The actor with a little seriousness on his face said that he would have her kidnapped which left us all wondering what the mere thought of Liza tying the knot with someone else was enough to anger the actor.

The next question was obvious as Tito boy asked who that person would be and Enrique just smiled.

He finally admitted to the relationship by saying “Yeah, we’re boyfriend-girlfriend” when Tito boy told him that everybody thinks that they are a couple.

Enrique also said that they haven’t given their relationship a title but they treated each other like girlfriends and boyfriends do and that even if they have no label, they are special for each other.

Enrique Gil also said in an interview that he is very close to Liza’s parents and they are very fond of him as well.

Apparently, the couple also has the adults’ blessings and is ready for a new start.

Liza Soberano has many admirers

Liza Soberano has become an interest for many celebrities and they have openly admitted to having a crush on her. It is no surprise that the doll-faced charming actress has drawn so much attention towards her.

She has also been linked with many of her other co-stars but she has had no official record of any past relationships.