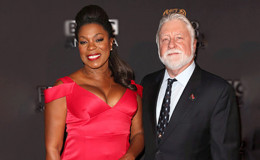 Lorraine Toussaint (born April 4, 1960) is a Trinidadian-American actress and producer. Toussaint began her career in theatre before supporting performances in films such as Breaking In.

Starting as a Shakespearean actress and now landing on the most critically acclaimed role as "Vee Parker" in the popular American soap opera series "Orange is the New Black" Lorraine Toussaint, has managed to gather a long line of fans and followers in her acting career.

Among those million fans, we sure cannot ignore her die hard fan, her husband himself, Micah Zane, with whom she has been married for a long time. Although the pair has walked together through every path of their lives, they have failed to continue their marriage together.

The duo got divorced a couple of years ago and now Lorraine is spending her life as a single mother. So let's get up close and personal with the brilliant actress in this section.

SAG (Screen Actors Guild) Award winner, Lorraine married her husband Micah Zane a long time ago. As per sources, the couple dated for quite a long time before tieing the knot.

However, the duo could not continue their marriage and they got a divorce a few years back.

This came as a shock to their fans as she confessed in one of her interviews about her failed marriage with Essence. She said:

As for now, Lorraine is single and has not been romantically involved with any man as of we know.

Although her marriage did not succeed, she has been blessed with a beautiful daughter, Samara. Lorraine has always portrayed the fierce and bold characters such as Lieutenant Joanna Reece in ABC's "Forever" and Leader Amelia Boynton in Oprah Winfrey-produced Feature "Selma".

Her fans have never seen the soft and motherly side of this brilliant actress.

Though Lorraine has managed to keep her personal life wrapped up, we came to know that she and her 11-year-old daughter Samara share this amazing mother-daughter bond as reported by The Huffington Post.

A photo posted by Lorraine Toussaint (@everydaylovelybylorraine) on May 22, 2016 at 5:39pm PDT

Sharing her difficult childhood, Lorraine told the sources that her horrible childhood experiences has taught a lot in her journey of motherhood.

" The experiences affected me enormously as a mother. It forged all of my great qualities as a mother. I recognized that you cannot brutalize a child’s body without being violent to their spirit."

Holding her daughter tightly she further added: "I know what it was like to not have a voice, so my daughter has a voice. I veto that voice when needed because at the end of the day I am the grown-up, but I hear her."

Also, when asked if she is dating anyone now, she immediately responded how could she date with a child. She said:

"How do you date with a child? I don’t know how. I would like to date. I don’t plan to live alone the rest of my life."

Here's video of Lorraine Toussaint talking about her childhood life and her Carribean roots.

Well, we hope that the brilliant actress soon find the man of her life and start a perfect family together.