Home Article Actress Louise Lombard is happily living with her two Children. Who is her husband?

Actress Louise Lombard is happily living with her two Children. Who is her husband? 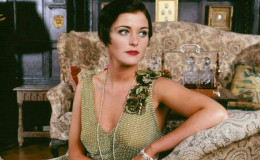 An English actress, a very devoted mother, popularly known for her role in 'CSI: Crime Scene Investigation' as Sofia Curtis, she is none other than Louise Lombard. She has also starred in various syndicated shows as well that also helped her earn name and fame in the Television industry.

She began taking drama classes at the tender age of 8. Lombard went to Trinity Catholic High School, a roman catholic school. Similarly, She has been voted for the people's choice magazine for top 50 beautiful people in the world in 1994.

Lombard has been an example of a person who was born to be in the arts. From her early age, she has shown amazing adaptation to any role that requires emotionally and psychologically challenging characters.

Not much is known about her personal life. She married her boyfriend named Jon Stephens in July 1998. But the marriage didn't work out so the couple parted there ways.

She then has a pretty serious relationship with a man named Alejandro Sol. The couple was deeply in love and also has two children; a boy and a girl together.

Their son's name was taken from his father's name, that is Alejandro Sol and the daughter's name is Rafaeala. However, the duo is no longer together.

There is currently no information regarding Louise's having a boyfriend. Her current relationship status is a mystery to the world.

Who is taking care of the children

Well, Louise is a very devoted mother so she takes care of her children's by herself. Her son was born in Los Angeles, California. But she is determined to take care of her son in a proper British manner.

She even said that she is feeling guilty because her son has picked up American dialect and has already started to say candy, not sweets.

However, fortunately, he still calls her out as 'Mumma' not 'mommy'. We are hopeful that her decision to take care of her children turns out to be good. We wish her all the luck she

We wish her all the luck she needs for that. We can see from her tweet that the way she is raising her children is very good.