Home Article Actress Melissa Benoist Married Blake Jenner in 2015. Are they having a child?

Actress Melissa Benoist Married Blake Jenner in 2015. Are they having a child? 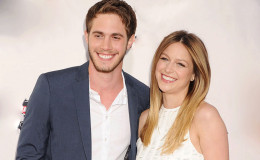 Melissa Marie Benois is an American actress and singer. She is known for her portrayal of the title character in the CBS/CW superhero drama series Supergirl.

The couple got engaged a couple of years back and got married secretly last year. They announced the big news only a few months after their wedding keeping everything hidden. Also, rumors of them having a baby is swirling up everywhere but we doubt that it's true or it could be true. Who knows?

So let's find out more about this adorable couple in today's digest.

According to Hollywood Life the co-stars of Glee, Melissa, and Blake who were romantically involved on their show but later parted ways have, however, amazingly managed to work things out best behind the screens.

The adorable duo secretly fell in love, got engaged quietly and also secretly exchanged rings in late March of 2015. Too much secret to keep for a singe couple!!

The pair started dating each other in 2012, during their filiming of American Hit Musical Drama, Glee. Soon after that the duo got engaged in 2013.

Two years after that, after completing filming her hit CBS drama, Supergirl-Melissa was seen flashing a beautiful silver ring while attending Comic-Con in San Diego, Us Weekly reports.

Not only that, Melissa has also Instagrammed some photos of her wearing the ring on her hand leaving her fans guessing!

They made things official on March 2015, after getting engaged in July 2013. Their wedding was not disclosed to the media and public as they organised a private wedding among the presence of their close friends and families.

After being a newly wedded husband and wife, they were spotted spending their honeymoon making romantic trips throughout Europe. Melissa has also posted some of her honeymoon memories on Instagram.

Is the couple having a baby?

The couple has been married for more than a year now, however, any news regarding them having a baby have not been heard so far.

As per our sources, the pair is currently busy in filming and shootings. Also, the adorable couple is now partners on and off screen!.

Blake has made a guest appearance on her show Supergirl and she claims she loves working with him.

On an interview with PEOPLE, Benoist, 27, Benoist told the sources:

“We only have fun working together and I love working with him. He’s my person to act with. He’s my favorite scene partner, always.”

Well, this reel, as well as a real-life couple are extremely happy together and we really hope that their story ends with a happily ever after.