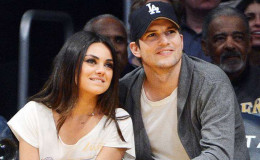 One of Hollywood’s hottest couples Ashton Kutcher and Mila Kunis are expecting their second baby together.

‘Bad moms’ actress Mila, and ‘Two and a half men’ actor Ashton, has confirmed the news that they are having a baby boy.

The couple who got married in July 2016 is already proud parents to a 20-month-old daughter named Wyatt Isabelle.

While the news has come as a huge surprise for the fans but their loyal followers know that both of them are pretty much excited to experience parenthood for the second time.

Well, we all know that Mila and Ashton first met on the set of the ‘70’s show’, it was the first television show for both of them and they remained very good friends even after the show was over.

However, both of them were in a different phase of their relationship Ashton was married to Demi Moore and Mila was in a serious relationship with actor Macaulay Culkin.

Even though they were with their respective partners Mila and Ashton were always a good friend. However, god has made a different plan for them and both of them got separated from their partners.

The two friends then started to become close with each other and began dating. Mila also said in one of her interviews that her relationship with Ashton is very strong because he is not just her husband but her best friend as well.

After dating for several years and giving a birth to their first child, Mila, and Ashton, tied the knot on 4th July 2016.

However, their wedding was done in a very secret way and only a few of their close friends and family were invited.

According to Page six, the duo got married at the house of Ashton’s business partner and a very good friend, Guy Oseary.

Ashton discussed some of his wedding preparations in one of his interview on the popular daytime show ‘The Ellen DeGeneres Show’. He said, “We really didn’t want helicopters at our wedding and it’s a legitimate concern. I was like posting things on social media that we were in different locations”.

On 1 October 2014, the lives of the actors’ changed forever when they welcomed their first child a daughter Wyatt Isabelle Kutcher, at Cedars-Sinai Medical Center in L.A.

The couple was already engaged at that time and they were very much excited about the baby. After the baby was born Ashton and Mils both shared how happy, emotional and excited they were after being a parent through their websites.

Wyatt was about 9.5 pounds at the time of her birth. Mila disclosed on ‘The Ellen DeGeneres Show’, she said, “Because she was so big, she was a heavy little thing; we skipped the newborn stage. She was a hearty eater”.

Currently, Wyatt is about to turn 2-years-old and we must say she is gorgeous and adorable just like her parents.

Well, she is going to be a big sister now as her mom is expecting and according to Mila she seems quite excited to have a baby brother in her life.

Ashton and Mila are expecting their second baby

Mila and Ashton are now gearing up to expand their family to four. The couple the news that they are having a baby boy and are very excited about that.

Similarly, Ashton also lights up when talking about his daughter Wyatt and the little one on the way. We must say Aston is really a good father.

Having a baby is always very special to everyone and we would like to wish both Ashton and Mila to have a healthy and happy baby.