Home Article After Divorce with Mashonda, Swizz Beatz Married with his Wife Alicia Keys in 2010.

After Divorce with Mashonda, Swizz Beatz Married with his Wife Alicia Keys in 2010. 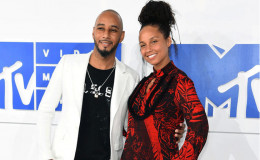 Even though we highly value love and commitment, infidelity and divorce, come crawling in one's life making it complicated. Divorce, affairs, and marital disputes have become a common thing these days, mostly for celebrities where they are seen jumping from one relationship to other. Well, today we bring you a similar story that revolves around popular hip-hop artist Swizz Beatz, his ex-wife Mashonda and soulful singer/actress Alicia Keys.

With swirling rumors of hip-hop singer Swizz having a secret affair with Alicia keys just after the birth of his first son, it caused quite a rumble in his married life that later came to an end after the rumor was confirmed. Beatz and Keys tied the knot in 2010, and the couple is also blessed with a son. Want to know more about it? Read here.

Before marrying Alicia, Swizz was a happily married man with a perfect family. In 1998, he first met the hot American singer/songwriter Mashonda Tifrere, and they started dating soon. After dating for a couple of years, the duo got married in 2004.

However, this relationship did not last that long as Swizz was accused of having an affair with the Grammy Award-winning singer Alicia Keys. What's more shocking is that Mashonda confessed they were still sleeping in the same bed, having a sexual relationship with each other and they just had their first son, Kasseem David Dean, Jr. when she came to know about the sexual affair between her husband and Alicia.

On an interview with RhymesWithSnitch, she told the sources:

“We were married. Sleeping in the same bed and having sex every night while he was seeing Alicia. Okay? It was an affair. 100 percent. I don’t know why people want to change that rule so much. We had just had a kid, for crying out loud. Our child was 8 months. I found out about Alicia two days before my son turned 1. They had been doing their thing for months before that.”

Not only that, but Swizz also had an alleged affair with UK singer-songwriter Jahna Sebastian which came out and opens to the public when he found that Jahna was pregnant with his child. Hence his second child, baby daughter Nicole was born in May of 2008 and confessed about it in August of 2009.

This shocking news crumbled his marriage into pieces, and finally, Mashonda broke off ties with her so-called husband. Later during 2009, Swizz confirmed his relationship with girlfriend Alicia Keys, and that's how their story began.

Their scandalized love affair drew much attention and Alicia was even entitled as a "home wrecker". However, the duo couple ignored all the critics and skeptics and finally decided to get married and before marrying Swizz, Alicia confessed that she did not start the affair during Swizz's marriage but only after they had separated.

The duo couple tied knots on July 31, 2010. They did not have a fancy or lavishing wedding, just a regular ceremony and got married quietly in a private home on the French Island of Corsica with some family and close friends by their side.

Since then, there has not been looking back for the dreamy couple as they seem happier and madly in love with each other.

The Couple Is Blessed With Two Adorable Children

The popular icons in the music industry are a proud father and mother to two adorable kids, both sons. Their first child was born in October of 2010 and was named 'Egypt Daoud Dean' after the African country "Egypt." Later, after four years, the duo announced that they were again expecting their second child.

Their second child, son Genesis Ali Dean was born on Dec. 27, 2014. The adorable family of four have been blessed with lots of love and happiness.

Also, sources report that everything has been settled out between Swizz and his ex-wife as they including Alicia were spotted spending a vacation in Nikki Beach together with their children. We guess all the misunderstandings have been settled down and everyone has moved on with their lives.

Alicia, with more than 8.5M+ followers on her Instagram, often posts pictures of her family, mostly her adorable kids and seems she's really happy with her life.

May we forever Show each other How to paint outside of the lines How to love each other with time That all colors are beautiful And the only limit is the ones you put on yourself From father to son From brother to brother From brother to sister Sister to sister And daughter to mother May we all love each other While the clock unwinds time Cause it never never minds Only now matters So live it ~~~~~~~~~~~~ Love shared is the most beautiful gift I love u guys endless ????????

Well, we wish that the beautiful family continues to stay in harmony and unity sharing infinite love and togetherness.