After divorcing with Trevor Engelson, is Meghan Markle Married again. 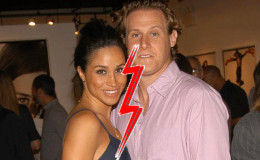 Meghan is an television superstar famous for her role in SUITS. She is now divorced and dating Royal Prince Harry of England.

Meghan Markle is an American actress famously known for her role as Rachel Zane on the TV drama SUITS and special agent of F.B.I Amy Jessup in Fringe. She dated Trevor Engelson since 2004 and they both tied the knot in 2011. This hot actress is currently Prince Harry of United Kingdom.

Meghan was born in Los Angeles, California. She was raised by her mother, a yoga instructor and a clinical therapist and and her father, a photography director. She was introduced to television at a very young age.

Dating and Marriage to Trevor Engelson

Meghan and Trevor started dating at around 2004. The couples then decided to marry and they got engaged in 2010 after 6 years of dating. They both got married on August 16, 2011. They tied the knot at The Jamaica Inn in Ocho Rios, Jamaica. There were 102 guest who were attending the ritual. The couples had no children between them.

After getting married for 2 years the couples split up in May 2013, and divorcing each other in August of the same year.

It was said that the main reason for the couples to split up was because of Meghan's closeness with Canadian Ice Hockey Star Michael Del Zotto. But her spokesman later cleared the air by saying that 'She was never alone with him and Mr Del Zotto had absolutely nothing to do with the end of her marriage.' But Markle herself cited "irreconcible differences" as the reason for the split.

Markel also waived her right to have spousal support. The divorce paper was obtained and it was clearly seen what was the reason for the couples separation.

After separating with Trevor, Meghan was single for a while before she started dating Prince Harry, the grandon of The Queen Elizabeth of United Kingdom in June. The couple first met on a charity event and Harry sent Meghan text message for a date. After dating for a number of times the couples are now serious for each other.

Meghan hasn't uploaded a picture of them together but by posting pictures likes this she definately gives some signals about their relationship.

Sleep tight xx (Update: Thanks so much to those who shared the photo cred :) I didn't know, and I love it! Credit where credit is due: I'm bananas for this @percxption) ??????

Prince Harry hasn't said anything about their relationship either but on November 8, Kensington Palace issued the first officiail confirmation that the pair are dating. But due to this announcement Markle had to face wave of abuse and harassment from the media.

Due to this incident Prince Harry's Communication Secretary Jason Knauf made a statement about Meghan saying that "Prince Harry is worried about Ms Markle's safety and is deeply disappointed that he has not been able to protect her."

Kensington Palace has issued a statement this morning about the harassment currently being experienced by Meghan Markle and her family. pic.twitter.com/EuFZ4fmUIj

Due to these incidents we can clearly say that Meghan is definately dating Prince Harry. Maybe one day the couples will come out in public and declare their love for each other.