Home Article After two divorces, is Stevie Wonder dating someone?

After two divorces, is Stevie Wonder dating someone? 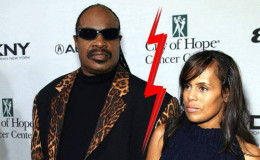 An American musician and multi-instrumentalist Stevie Wonder is considered as one of the critically and commercial successful performers of Late 20th century. Besides his successful career, he has some ups and downs in his personal life. He is married twice with Syreeta Wright and Kai Millard Morris. Unfortunately, he got divorced from his both wife. Though he married just two women but he has affairs with various other women and has children from them too.

An American musician Stevie Wonder is considered as one of the most critically and commercially successful performers of Late 20th century is also the inspirational personality. Despite his medical condition, he is one of the best singers we have till date.

Besides his successful career, he has some ups and downs in his personal life. He has been married twice, first to Syreeta Wright and Kai Millard Morris. Unfortunately, he got divorced both the time.

Now, however, he is happy with his current girlfriend Tomeeka Robyn Bracy. The couple also has two children together. Let’s find out more about his married life, children and relationship.

Stevie is currently dating Tomeeka and the couple is very happy together despite their age difference. After two divorces and several failed relationship we did not think he will fall in love again but here he is happy and in a relationship.

When everyone thought it was just an another affair of Stevie 67, and he is not serious about his girlfriend Tomeeka, 42 he proved everyone wrong by accepting her as his lawfully wedded wife.

He married Tomeeka shutting down all the unnecessary rumors about them. They tied the knot in a star-studded wedding ceremony at the Hotel Bel-Air.

As per the source:

"Everything was so beautiful not to mention the hundreds of butterflies that were released from a box during the ceremony,"

Steve Wonder tied the knot to Syreeta Wright in 1970 after dating for few years. However, they got an amicable divorce in 1972.

Even after the divorce, the ex-pair worked together in various projects. They gave several hits together including ‘signed, sealed and ‘If You Really Love Me.

Unfortunately, She died of breast and bone cancer in 2004 at her home in Los Angeles.  She died at the age of 58 and was buried in Ingle Park Cemetry.

Though they seemed so much in love with each other after 8 years of their marriage, they got separated in 2009.

They filed for a divorce in 2012 after three years of their separation.

According to the report, The Grammy award winner has been ordered to pay $25,000 a month for the couple’s two children.

Wonder has nine children by five different women. His first child was a baby girl, born in 1975 from Yolanda Simmons.

The pair named the child Alisha Morris. They first met when Simmons applied for a job of secretary for his publishing company.

Two years later, they got blessed with a second child Keita, baby boy, born in 1977. In 1983, Wonder has a son with Melody McCulley.

Similarly, he also has a daughter, Sophia, and a son, Kwame whose mothers are a mystery to the world.

Similarly, Wonder has two children from his current girlfriend Tommeeka Robyn Bracy. We must say he has a very big family.