Home Article Aly Michalka and Stephen Ringer have been married since 2015. See their relationship status.

Aly Michalka and Stephen Ringer have been married since 2015. See their relationship status. 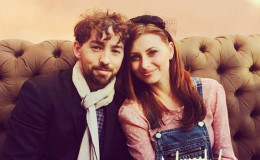 Most of you might not know this, but the most beautiful and a femme fatale American actress Alyson Renae Michalka is no longer an eligible bachelorette. The former Disney star has tied the knot with her boyfriend of two years, Stephen Ringer last year. Sounds romantic, doesn't it?

Aly, 26, who is famously known for her role as Keely Teslow in the Disney channel series Phil of the Future, has finally settled down and the couple is doing really well and has never been this happy ever before.

Well, we do want all the details of their wedding and what they've been up to these days. So, without wasting any time, let's find out!

Before organizing a grand wedding, Aly first shared that she was engaged to be married on her official Instagram in July 2014 and posted the picture of her ring with a caption,"So this happened.."

One year later, Aly made it official and organized a grand wedding over the weekend of June 6 of last year.

The couple tied the knot in an intimate ceremony at the Belmond Hotel Splendid, located in the charming fishing valley of Portofino, Italy! Could this be any more romantic?

Here are some of the pictures of Aly's dream wedding.

Aly and Stephen taking their vows together

Some snaps of the wedding

In a picturesque outdoor ceremony, with Aly's younger sister standing by her side as maid of honor, the couple publicly announced their love for each other, exchanged vows and kissed as a husband and wife in front of all friends and families.

Aly first met Stephen, 30 while working together on a movie 'Sequoia' in 2012. In the movie, Aly played the lead role whereas Stephen worked in the Cinematography department of the movie.

We can assume that this adorable couple fell in love with each other after a couple of dates and dinners and now they have decided to spent the rest of their lives together.

According to our sources, we found that Stephen is a Cinematographer and film director too. He has recently finished  production on his latest short film, 'The Films of Avi Krum'. He's also worked on the lots of projects with Aly and also directed her “Hothouse” music video with sister AJ.

The lovely couple is seen hanging out, going on romantic vacations and dinner together and posts about them on their social media sites.

Aren't we lucky to have family friends visit us from Seattle?! We missed you @goodluckbuck #aboutlastnight

This guy was born 32 years ago today & I couldn't be more grateful #happybirthday baby, I love you more than ever @auhasardspr

Well, the couple has been together for nearly two years and Stephen seems to be a very loving and caring husband. We really wish all the happiness and a content life to this newly wedded couple.