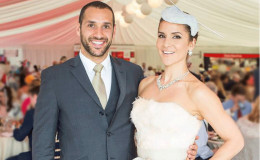 The stunning TV anchor and a former supermodel, Amanda Byram is now off the market! Most popularly known for hosting BBC One game show "Total Wipeout" and American Television show "Paradise Hotel", Amanda has already exchanged her "I do's" with her long time boyfriend, now husband Julian Okines.

Let's take a closer look into their happily married life.

The amazing couple met during the summer of 2014 and were secretly dating each other. After nearly two years of a love affair, the pair finally decided to make it official by exchanging vows and got married in April 2016.

Their wedding bells rang so merrily that they seemed the happiest couple during their wedding. To make this joyous moment memorable, the duo married twice, first in London with a star-studded ceremony and second time on their honeymoon trip to Maldives where they organized a beach blessing ceremony. Sounds magical, doesn't it?

According to Hello! Magazine, the pair were very excited sharing this big news with the public and media and told the sources: "We feel lucky and blessed that we got a chance to meet each other."

Their wedding was also featured in the VIP magazine and she has also Instagrammed it with much pride and happiness.

Thank you @vip.magazine for featuring beautiful memories of our wedding in your magazine. Here's one that makes my heart flutter every time I see it... My Dad walking me up the aisle, as I am smiling at hubby-to-be @julianokines Go grab a copy for more! #mytwomen #papa #husband #love #wedding #bestdayever photo [email protected]

How did the pair first met?

The adorable pair met during an event in 2014, organized by BBC one. Julian Okines is a creative content producer or simply, he's a TV producer from London.

After their first encounter, they instantly fell for each other and started a secret affair.

The duo revealed their secret love affair only after a year when she quoted: "365 days of happy with this brilliant human" tagging Julian Okines and posted a romantic picture of them celebrating their anniversary.

Before marrying Julian, Amanda was previously engaged to her rugby player fiancé Craig McMullen. The couple got engaged in 2009 and continued their relationship for three long years.

However, the relationship could not last long as they decided to part ways in early 2012.

After the tragic end of her love story, she gave up hope on love and marriage. On an interview with BelfastTelegraph.co.uk, she told:

"I believed that I was never going to settle down with one guy. At this stage, I was 40, and I was thinking that I had left it too late to have kids, left it too late to marry. And you go out on disastrous dates and you think, 'Okay, there's a chance I may be single forever!'."

This all took a turn when she met Julian and started dating him. She further told the sources:

"I remember thinking one day; 'Okay universe, I'm ready now. And then I met Julian'. And he is absolutely brilliant. His background is psychology degree-slash-model. So his mind is pretty brilliant. And he's hot!"

Here's a video of Amanda talking with TV3 about her show on Irish TV and also about her married life.

All in all, we can say that Amanda is doing really well professionally and personally. We wish the couple all the happiness and hope to see them starting their perfect family soon.