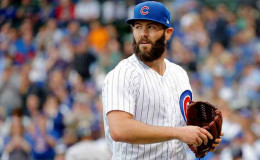 American professional baseball pitcher Jake Arrieta has a special place on the field and heart of many fan followers. He's always performed the best and that's making him gain wide popularity day after the other. His personal life always comes on top when people usually discuss about him.

American professional baseball pitcher Jake Arrieta has a special place on the field and heart of many fan followers. He's always performed the best and that's making him gain wide popularity day after the other. His personal life always comes on top when people usually discuss him.

He is living a blessed life with his wife of 10 years Britanny Arrieta. They have been together since elementary school and are almost inseparable. Wanna know more about their relationship, kids and more, follow the path ahead.

We barely hear relationship stories that sustain for decades, you can assume yourself the lucky one.

While the news about extra affairs and divorce regularly hit the media, some people and their relationship become an example for many. 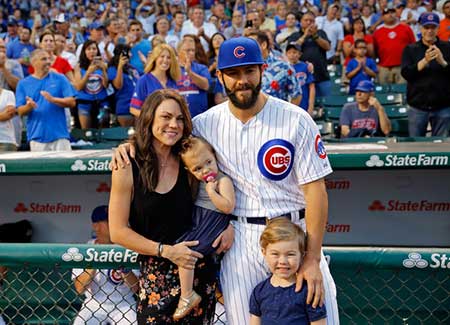 Jake Arrieta and Brittany Arrieta with their kids
Source: Zimbio

American professional baseball player Jake Arrieta is living a happy married life with his wife Brittany Arrieta. They both attended Plano East Senior High School in Plano, Texas and became an item when they were in their junior year.

Not only the same high school they were together in the elementary school as well. Later, they attended Texas Christian University in Fort Worth, Texas together.

Thank you for putting up with my shit, holding down the fort day in day out, growing me two beautiful babies, and much more... ???? Happy Valentine's Day to you @brittarrieta34

After some years of dating, Arietta proposed his childhood love in late 2007 and the couple finally took their relationship to the next level in November 2008.

The wedding ceremony took place at the Gaylord Texan in Grapevine, Texas. Their romantic relationship is much like a lovely adult fiction. It's almost been a decade and the couple still has every possible reason to celebrate the longevity of their relationship.

Brittany and Jake have two children together; a son named Cooper Arrieta and a daughter Palmer Arrieta. The sports star regularly posts beautiful images of his family members via Instagram.

Not only Jake is proud of being a father his wife is equally excited about being a mother-of-two. Brittany is also active on news media as she shares adorable posts of her kids.

Breakfast with the tandem known as Bernie. Gear'n up for a big day

During an interview with Chicago Splash, Brittany said that she sends a video message of their kids wishing him all the very best during games.

Arietta signed a three-year deal of $75 million with the Philadelphia Phillies on 11 March 2018. We can say, his family members have a key role in his successful career. 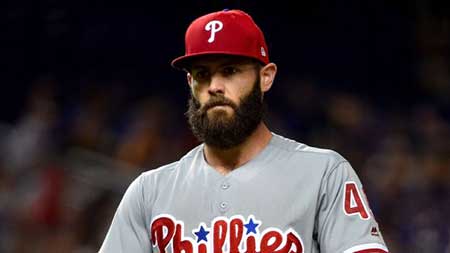