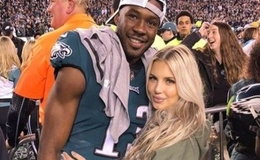 Forget about the Beckhams and allow us to introduce to the second close most stylish couple in Hollywood, none other than Nelson Agholor and his stunner of a girlfriend, Viviana Volpicelli.

Surely, these days, the popular Philadelphia Eagle star Nelson Agholor mostly keeps his personal life especially his dating life as secretive as possible from the prying eyes of the public, which is pretty comprehensible though. But, behind the curtains, the football pro, however, enjoys a successful relationship. Pondering to find out the lucky woman?

For the currently 26 years old Wild Receiver, Agholor's love story began at the University of Southern California where he first laid his eyes on the most beautiful woman aka Viviana Volpicelli who would later become the love of his life. 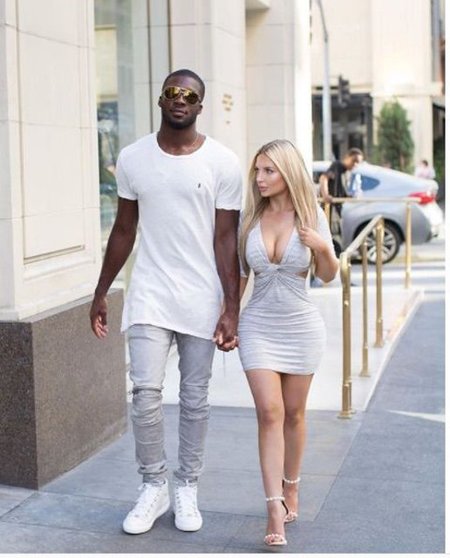 Whilst Agholor joined the campus in 2012, Volpicelli joined USC in 2013. Although Nelson played for the college Trojans team from 2012 till 2014 before the Philadelphia Eagle drafted Nelson in 2015, his relationship with Viviana still has been going smoother.

As a matter of fact, whilst maintaining a long-distance relationship is surely a challenge for the couple, the Florida-bred and her partner who resides in California moves back and forth between the two places.

Besides, Viviana is also often seen supporting her man in the field. And more precisely, the blonde beauty was also spotted when Agholor's team won the game against the New England Patriots on 4th February 2018. 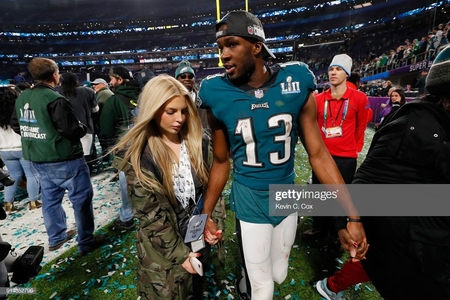 Viviana Volpicelli as seen together with Nelson Agholor in the game field of NFL game. SOURCE: Getty Images

Not to let it go, the Berkely Preparatory School alum previously also admitted his feelings and honored his girlfriend for keeping up with him since the day they first met, on the auspicious occasion of New Year 2018.

And, at this point, you must be wondering about the identity of the future potent wife of Mr. Agholor. Here's everything you need to know.

To shed the light, Viviana is the daughter of a medical professional aka Dr. Anton Volpicelli who serves as the managing physician at the US Healthworks Medical Centre California and real estate agent, Diane Volpicelli. 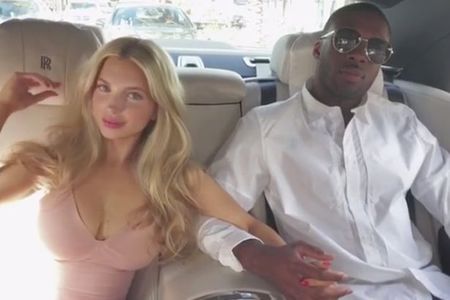 Originally from Los Angeles, Diane studied at the Palos Verdes High School. As a matter of fact, Viviana followed the footsteps of her mother and graduated from USC  in 2017 with a degree in Real estate Development.

Aside, Volpicelli is highly involved as a beauty blogger and Instagram model who also makes side money by promoting products of Pretty Little Thing. FYI, Agholor highly prioritizes natural products, makeover, and fashion on her blogging website.

Meanwhile, rumors circulated that the couple might be getting married soon. The rumor, however, is yet to be verified to be true as neither Nelson and Viviana has affirmed the speculation.

View more Biographies and Gossips only on Marriedwiki.com.