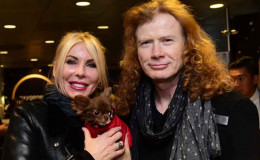 Dave Mustaine tied the knot with his spouse in the early 90s. Although the couple is together for nearly three decades, they faced several challenges along the way to keep their marriage alive.

There's always a certain admirable aspect of long-term marriages. While on the surface it often looks like the couple is perfect for each other - it does not prove to be the case when you learn more about their married life.

Dave Mustaine tied the knot with his spouse in the early 90s. Although the couple is together for nearly three decades, they faced several challenges along the way to keep their marriage alive.

In fact, it was one special friend of Mustaine who provided a decisive assist in ensuring this adorable couple stays together.

Megadeth star, Dave Mustaine's daughter Electra Mustaine updated her social media account with a word about coronavirus and warned the people for the COVID-19 threatening.

Electra Mustaine talked on the issue and warned if we're afraid to make mistakes, we made more mistakes.

"was gonna write the usual caption here but today wanted to say... I hope you all are staying safe. Obviously fear makes everything worse, so keep our heads up. Let's still be smart and responsible!

As of March 2020, the 58-year-old actor and his family are living sound life in San Diego, California with no rumors of separation. Dave and his spouse, Pamela has been united as life partners for over twenty-years today.

David Mustaine is married to his beautiful wife Pamela Anne Casselberry. The couple tied the knot way back in April 1991 after kindling romance for several years. 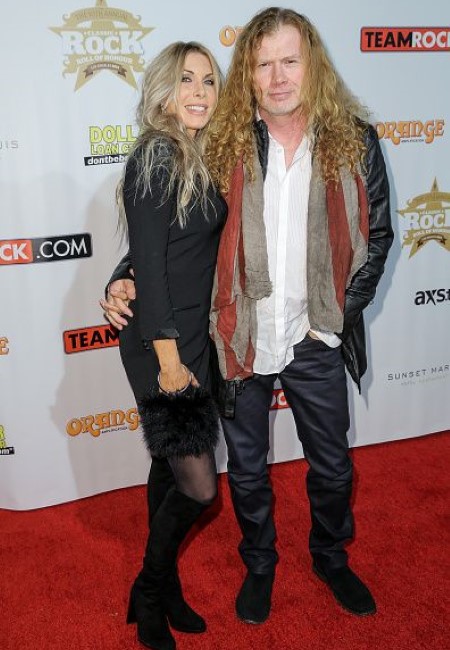 Both of Mustaine's kids followed their father's footsteps into showbiz. Justus is an actor and a guitarist. He has made numerous appearances in stage productions, although he is yet to venture into the on-screen acting career.

Meanwhile, the couple's daughter Electra is a singer, songwriter, and guitarist. She is looking to make a career as a country music artist. 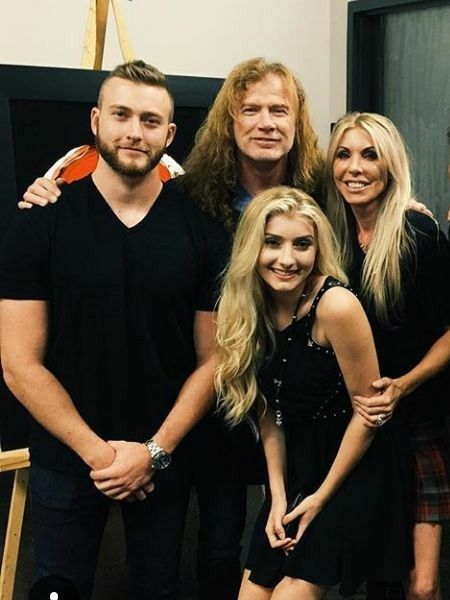 Dave Mustaine with his wife and two kids
Source: Pinterest

This adorable couple faced many challenges in their conjugal life. Regardless of all, the duo reconciled after two separations. It was reported Dave and Pamela filed for divorce twice in May 2006 and February 2008.

The pair ended up changing their minds and subsequently withdrawing their petitions. The family previously lived in Arizona and is now believed to currently reside in Fallbrook, California.

Dave Mustaine Says David Ellefson Helped Him Save His Marriage

Back in August 2017, during an interview with MagentaMusik 360's Sara Kelly-Husain at Wacken Open Air festival in Wacken, Germany, Dave Mustaine was asked how he managed to keep his marriage together for over two decades. 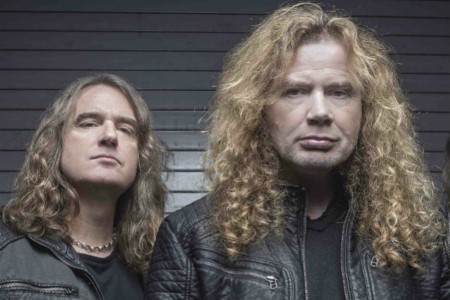 Revealing the secret to his long-lasting marriage, the guitarist (jokingly) said:

"I think [my wife's] friends think she's desperate. You've gotta work on it. Anything worth having is worth keeping and you've gotta work at it. It helps that we're friends first and foremost; it wasn't just physical."

Later in the conversation, Mustaine revealed he would be a divorced man right now if it was not for David Ellefson's efforts. Apparently, the Megadeth Bassist challenged Dave telling him,

'Have you been the best husband you could possibly be? Cause [my wife and me] were separated.'

Dave claims he responded with 'You know what? No, I haven't been the best husband I could be. I could be way better.' This is when he went back to his wife and they subsequently had their renaissance as they fell in love once again.

Mustaine continued, this is a great challenge for a lot of men that are married, to realize whether they are the best husband irrespective of whether or not their spouse is the best wife. However, both husband and wife need to do their part to ensure a successful marriage.

Earlier in March 2007 during an interview with BBC Radio 1, Mustaine talked about how his family was affected by his extensive touring. He said:

"There needs to be time off in between each leg for me to nurture my family, because I just resolved heading for divorce, and that was really a terrible thing."

Dave added, his marriage never really worked well since the music was always the topmost priority. However, he later put music third in his priority list. The musician put faith first and family second.

Mustaine believes this approach helps him even in his performance as a musician since there's nothing bothering him on the back of his mind.

When everything is going well and he steps into the guitar world, Mustaine believes he can just put his headphones on, pick up the guitar and be like 'Okay, now it's time to unleash the beast and to really, really just get it on.' 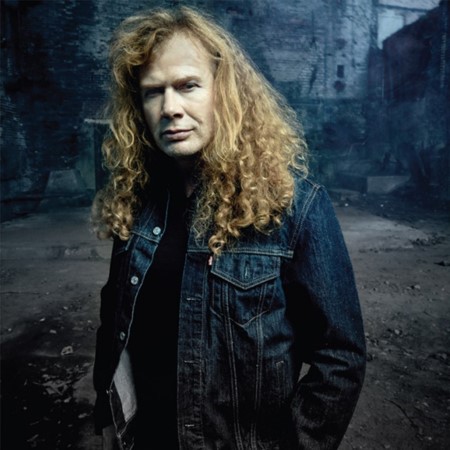 Keep coming back to Marriedwiki.com for more articles.