Home Article Singer Anabel Englund is still single and is not dating anyone; She was in a relationship with Jesse Rutherford: Currently, is focused on her career

Singer Anabel Englund is still single and is not dating anyone; She was in a relationship with Jesse Rutherford: Currently, is focused on her career 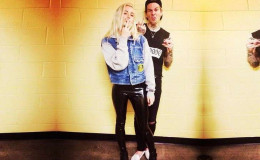 Anabel Englund and Jesse Rutherford had broken up since 2014. And now both of them are happy in their life.

Regarding her personal life, she prefers to keep mum on this topic. Her relationship with the lead singer Jesse Rutherford of the band The Neighborhoods grabbed everyone attention but the duo is no longer together.

Well, today we are going to provide every scoop of information regarding Anabel and Jesse's relationship. So, stay with us!!!!

Both Anabel and Jesse belong to the entertainment fraternity that might be the reason for their relationship, however, they never spoke about their dating life.

During the concert of the band The Neighbourhood of Rutherford, Anabel was there before the band even took the stage.

After that concert people assumed that, Rutherford’s heart tattoo on his shoulder was dedicated to his lady love ‘Ananbel Englund’.

As per some sources, Anabel and Jesse were in an on-off relationship for several years and in 2014 they officially broke up.

After their breakup, Anabel is not linked with anyone officially whereas Rutherford’s has been in a relationship with ‘Devon Lee Carlos’, co-founder of ‘Wildflower cases’ since 2016.

Though both of them are not together anymore they are always gonna loved by their fans.

Rutherford was arrested by police

According to police, Jesse was spotted by TSA agents while he was trying to ditch a bag of marijuana in the terminal’s food court. Rutherford’s was nabbed and walk in shame in an airport.