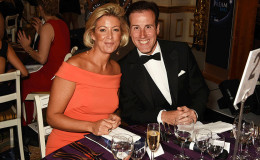 Anton Du Beke is known for his elegant dance moves. He currently waiting for the delivery of his twins with his girlfriend Hannah Summers.

Anthony Paul Beke professionally known as Anton du Beke is a British dancer and a television anchor. He is known as a professional dancer on the BBC's show Strictly Come Dancing.

Anton is currently dating Hannah Summers and they are expecting their first child together. According to the report, it's a twin. Let us find out more about the adorable duo.

Anton is currently in a relationship with Hannah Summers. They started dating in the summer of 2012 after the dancer broke up with the daughter of a business tycoon, Caroline Feraday.

Their relationship was publicly announced in December of 2012. Hannah is a top businesswoman and the head of a telecommunication firm.

She seems to be the perfect match for Anton as they are living together in Buckinghamshire since then.

The couple is expecting their first child

Anton and Hannah on November 6, 2016, announced that they are expecting the twins. Anton took it to the twitter to announce this wonderful news to all his fans all across the globe.

Hannah and I are delighted to announce that we are expecting twins in the spring. We are over the moon! pic.twitter.com/t2K8W8ezKy

Earlier, it was said that. they were trying to raise a family for some time but wasn't able to due to some personal reason.

A source close to duo told that "Anton and Hannah are very happy together, and they decided some time ago that they were both ready to have children."

Finally, they tried the IVF treatment and this time happiness knocked their door as it was announced that Hannah is going to be the mother of twins in the spring of 2017.

Before falling in love with his current girlfriend Hannah Summers Anton was in a relationship with English radio and television broadcaster Caroline Feraday.

He started dating Feraday in 2006. But their relationship was short-lived as the couple decided to split up after a year of their relation.

According to a report, it was said that the reason for their split up was because things weren't working as they were supposed to.

Currently, both of them has moved on in their respective lives and we wish Anton and Hannah to be blessed with one of the most beautiful children.