Home Article April Ross and husband Bradley Keenan are together since 2010. See their married life.

April Ross and husband Bradley Keenan are together since 2010. See their married life. 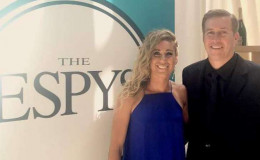 The couple got married in 2010 and living a blissful family life since then. They do not have any children yet as both of them are focused in their respective career.

Keenan and Ross first met on the AVP tour in the year 2006 and were also named rookies of the year the same year.

Finally, they started dating in 2007 before getting hitched in 2010. According to April, she finds herself really fortunate to have a partner who is so much supportive, understanding and helpful.

She said, “My husband I met playing beach volleyball, he is also a professional player. He is currently getting his masters in coaching and is an assistant with the Women’s National Indoor team”.

April further added, “We work really well together and I welcome any coaching tips he wants to give me. We have been married for five years.”

The couple has excepted each others’ flaws

No one is perfect in this world everyone has a different way of living life and you have to expect that person the way he/she is just like Ross and Keenan has accepted each other.

Ross does not like her husband’s driving she said, “Keenan’s driving brothers me.” Kennan is a bit slow driver and April like speed.

Similarly, she is quite competitive in every factor and Keenan has accepted her like the way she is. Both of them are not perfect but they make each other perfect and complete which is enough to live a happy and successful family life. Isn’t It?

Getting my golf legs back! Feeling ready for the Jesse Brewer Annual Memorial Golf Classic this weekend! (Disclaimer: it's best ball??)

I swear he loves me?? & I'm already in love with the team and vibe here at ASU! ?????? #FightOnAndFearTheFork??? #FTFOFTF

They treat their cat Critter like their own child

Two of them do not have children yet but they do have an adorable cat Critter, who they treat like their own child. Both of them seemed to be an animal person.

Bradley rescued the cat while they were dating and he is still with them. The cat even has his own twitter account, @CritterTheeCat which was the last active in November 2014.

April told NBC Olympics, “People ask us about her at get-togethers like she’s our child. She hunts birds and brings them to us as gifts, it’s gross, but it’s her way of contributing to our family and we spoil her with treats.”

We can surely assume that the duo is living a blissful life with lots of happiness and we wish their life to remain as it is for the rest of their life.