Home Article Audioslave's lead Singer Chris Cornell is no more; Found dead in his Hotel room. Let us take a took in his career and married life.

Audioslave's lead Singer Chris Cornell is no more; Found dead in his Hotel room. Let us take a took in his career and married life. 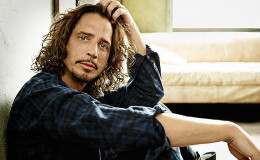 Singer Chris Cornell dies at the age of 52, on May 18th on the bathroom floor of the MGM hotel where he was staying, death by suicide.

The entire entertainment and music industry is mourning by the devastating news, the death of  Audioslave lead vocalist and the rock band Soundgarden vocalist and rhythm guitarist, Chris Cornell.

The bold and powerful singer died recently on Wednesday night just a few hours after his band performed at a concert in Detroit. The details of his death were not revealed until yesterday which has shocked everyone.

The 52-year-old singer had a troublesome past but the greatness of this legendary singer will remain forever. Today let's take a moment to know him up close and look upon his journey and his career.

The Soundgarden and Audioslave Frontman Chris Cornell dies at 52: A suspected suicide

Chris and his band did a rocking performance at the Fox Theater in Detroit on Wednesday night, May 17, 2017. He looked lively and energetic throughout the performance but who knew that it would be his last performance. 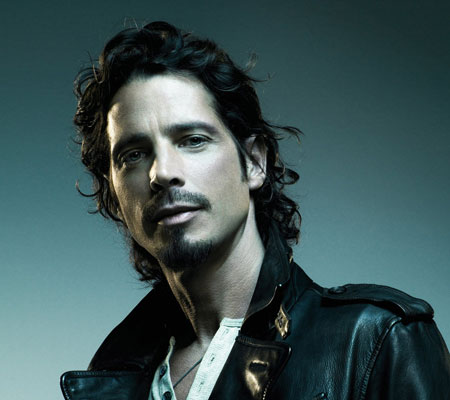 Singer and guitarist, Chris Cornell dies at the age of 52, Source: Telegraph.co.uk

The cause of the death was identified as an attempted suicide by hanging, as reported by Wayne County medical examiner office which was released on Thursday afternoon after the post mortem.

Cornell's representative, Brian Bumbery describes the incident as sudden and unexpected. He also revealed that the incident happened around the midnight when one of Chris's family friend reported the death to Detroit Police Department after seeing Chris unresponsive on the bathroom floor of the  MGM Grand hotel and casino, where the singer was staying. 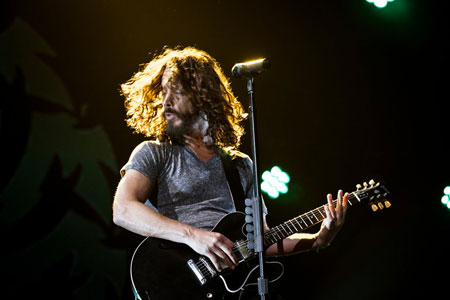 He was lying on the bathroom with a band wrapped around his neck and was pronounced dead at the scene.  Also, there are no signs of a suicide note or drugs and alcohol at the scene.

All of his close friends and families, including his wife, Vicky Karayiannis are in deep shock and grief and everyone has paid a huge tribute to the talented singer.

Many celebrities including Elton John and Brad Pitt who are Chris's long time friend reacted with immense sorrow and regrets on their social media.

A source told E! News that Brad Pitt is devasted and in shock and he is trying to process the loss of his great friend. The Fury actor, however, has not spoken about this with the media.

"Shocked and saddened by the sudden death of @chriscornell. A great singer, songwriter and the loveliest man."

Shocked and saddened by the sudden death of @chriscornell. A great singer, songwriter and the loveliest man. pic.twitter.com/Hwdgst8kmg

Many tributes and condolences filled up the social media including the actors and musicians of various genres:

Very sad news about Chris Cornell today. A sad loss of a great talent to the world, his friends and family. Rest In Peace. pic.twitter.com/BlgxE6cJLH

A mutual friend called me and tells me my bro passed away. #RIPChrisCornell You are a great artist Love to Vicki and fam @nilerodgers pic.twitter.com/FhG0fhT0q1

SO SO stunned to hear about Chris Cornell! Such a terrible and sad loss! Thinking of his family tonight! RIP

I hope it's ok with the grief police if I say Chris Cornell's death has come as an unexpected gut punch this morning.

Gutted to hear Chris Cornell has passed away. Audioslave are one of my all time favourite bands. I saw him live 6 times & was always amazing

Oh man. Sad to hear of the passing of Chris Cornell.

Just last Friday on 19 May, Cornell's wife Vickey Cornell released her first statement after her husband's death speculating that his suicide could be due to too much intake of anxiety medication.

"Chris's death is a loss that escapes words and has created an emptiness in my heart that will never be filled. As everyone who knew him commented, Chris was a devoted father and husband. He was my best friend.

"When we spoke after the show, I noticed he was slurring his words; he was different. When he told me he may have taken an extra Ativan or two, I contacted security and asked that they check on him. What happened is inexplicable and I am hopeful that further medical reports will provide additional details. I know that he loved our children and he would not hurt them by intentionally taking his own life."

Even the doctors are now raising questions regarding Chris's overdose of anxiety medication. Cornell's attorney Kirk Pasich states that without toxicology tests, this cannot be confirmed. The updates are yet to follow. 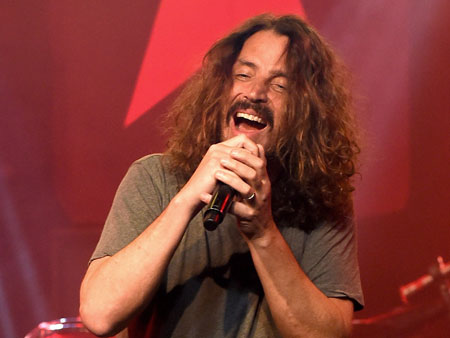 Onstage with #Audioslave in Montreal, 2005 #tbt

Well on this sad note, we pay our heartfelt condolences and pay for the bereaved family of late singer Chriss Cornell.  We are deeply saddened by the loss of a hero, a proud father and a singing sensation. He will be truley missed!