They say there's nothing like 'Giving Up' as one can achieve anything despite all the restrictions in the world. Australian Evangelist Nick Vujicic showed us all, how 'Not To Give Up.'

They say there's nothing like 'Giving Up' as one can achieve anything despite all the restrictions in the world. Australian Evangelist Nick Vujicic showed us all, how 'Not To Give Up.'

Born with Phocomelia, which causes a person to be born without limbs, Nick has tasted success that every man dreams of. He is in a marital bliss with his wife who has been his rock all his life.

Today in this section, let's take a look at his personal life and find out more about his delightful personal life.

Growing up, Nick never imagined he'd be a married man with a beautiful wife and his kids. Looking back now, Nick must be feeling how things turned out for him in the end.

For Nick, it turned out quite well as he is married to that same woman whom he laid his eyes on for the first time and fall in love. It was like a match made in heaven for him. 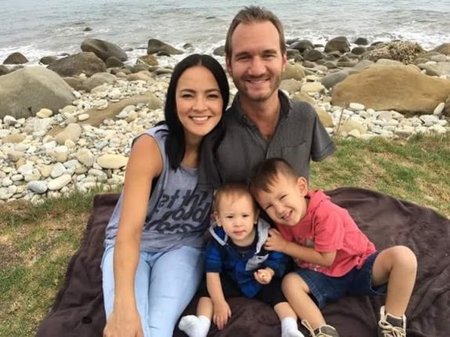 Nick with his wife Kanae
Source: Being Christian

He met his wife, Kanae Miyahara back in 2008 when she attended one of his motivational speeches. It was at that time when Nick realized she is meant to be with him.

On the other hand, Kanae was already impressed by his generosity and sense of humor. She even thought of him as her perfect match and still believes he is the most handsome person he ever knew.

It was then the couple decided to date and became a couple. Soon Nick decided to take his relationship up one notch. He proposed his girlfriend to marry him in one of the cutest way possible.

He asked for her hand and put the ring on it. As he was not born with any limbs, he had to resort to his mouth to the put the ring. At first, his girlfriend thought he is somehow biting her finger but later when she saw the ring, tears came pouring down.

Soon after their marriage, the couple got married in an intimate ceremony on the occasion of Valentine's Day back on February 14, 2012.

Nick was always very adamant about having his own kids but because of his disability he was quite worried whether he'll be able to become a father of any children.

And just like all obstacles in his life, Nick climbed on top of this one as well and he and his wife welcomed their first child, Kiyoshi James Vujicic, in 2013. Subsequently, they welcomed another boy named Dejan Levi Vujicic, in 2015.

Nick with his wife and two Children
Source: Pinterest

The couple is also blessed with two more children, twin daughters back in 2017. They named their daughters, Ellie Laurel Vujicic, and Olivia Mei Vujicic.

This makes him altogether a parent of four children, two sons, and two daughters. Truly, a happy family, don't you think?

Nick along with his kids and wife lives at his residence in Southern California. 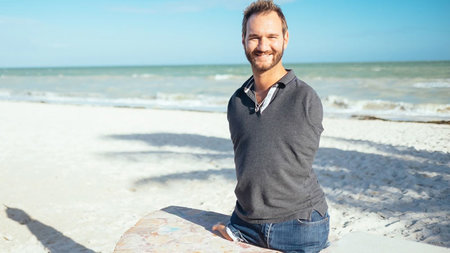