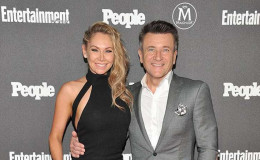 The couple first met on the show ‘Dancing with the Stars’ on its 20th season where they were paired up together.

We must say that it was a match made in dancing heaven as the dance was the reason behind their closeness.

The couple has only been married for three months but by just looking at them we can assume that they are so much in love and their relationship is growing strong day by day.

Kym and Robert met when they were paired together on the popular reality series ‘Dancing with the stars”.

The pair fell in love during the rehearsals of the show in 2015, and even after the couple was eliminated from the show they continued to see each other and announced their engagement in 2015.

The romance surely blossomed out of a friendship between the duo as they spent time together performing and rehearsing in ‘Dancing with the Stars’.

Only after dating for a year the two announced their engagement. The Canadian multi-millionaire businessman confirmed the news stating, “I still can’t believe that a year after walking into a dance studio of all places, my life has changed this much”.

He further added, “Kym is an incredible woman and I’m just so excited for what the future brings for us”.

Robert popped the question to Johnson by presenting her a 6.5-carat ring. Lucky girl, we must say. Later on, they celebrated their engagement with their close friends and family members.

The professional dancer shared her happiness by stating that, “I’m just overwhelmed and so happy, He’s a wonderful man and I’m so happy”.

Ballroom dancer married the multi-millionaire Shark Tank investor on 31 July 2016 in California. The ceremony took place at the Four Seasons in Beverly Hills in front of 250 guests.

Gorgeous Kim wore a Monique Lhuillier strapless gown and escorted down the aisle by both her father and mother. She was actually looking like a princess that day.

This is Kym’s first marriage, however; the 52-year-old businessman was already married. He even has three children from his previous marriage to Daine Plese.

The former couple got a divorce after 25-years of their marriage in 2014. As far as the relationship of Kym and Robert’s is concerned they look very happy and complete with each together.

Even though there is a huge age gap between the pair nothing matters when you are in love. They look equally gorgeous together like every other couple. We would like to wish them to have a fairytale married life.

Couples journey on ‘Dancing with the stars’

The duo presented the Cha-Cha-Cha dancing style on the first week on the show. Their performances were average as compared to other dancing couples which were one of the reasons behind them being eliminated on its eight weeks.

Even though they did not perform quite well on Dancing with the stars, the show turned out to be the best part of their life as they found each other.

The loyal fans of the show will surely miss her but maybe she wants to spend lots of time with her husband now rather than focusing on dance. Whatever, maybe the reason all of her fans will always support her and will wish for her best.