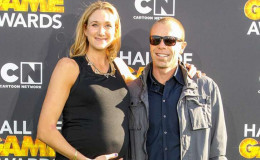 Three-time Olympic gold medalist Kerri Walsh-Jennings married Casey Jennings who is also a beach volleyball player in 2004. The couple has three beautiful children together; two sons and a gorgeous daughter.

Three-time Olympic gold medalist Kerri Walsh-Jennings married Casey Jennings who is also a beach volleyball player in 2004. The couple has three beautiful children together; two sons and a gorgeous daughter.

The couple has a beautiful family and living a blissful married life with no rumors of a divorce. They both belongs to the same profession and understands each other's job very well which might be one of the reasons behind their successful marriage.

The duo got hitched in 2004 after dating for three years. That same year she also won her first gold medal. The wedding turned out to be quite lucky for her.

It was the first marriage for Walsh but not for her husband as he was married before to Hilary Clark in 1999 and got a divorce in 2000 because of growing problems and misunderstandings.

They first met when both of them were trying being on the professional beach volleyball tour. Both succeeded and their love story took off.

Eventually, every relationship will face a rough patch and one can only overcome through each other’s support. Likewise in the life of Jennings’ couple that time came when Kerri won her second gold medal in 2008.

She was emotionally shattered and began drinking as well which is why she even consulted with Michael Gervais who is a sports psychologist.

She said ‘USA TODAY, “We lost that connection, and I didn’t think we could get it back.” However, everything started sorting out after they met psychologist Michael. She said, “It was a six-month process that ‘felt like it was six years’”.

Kerri further added, “I knew he loved me, and I knew I loved him. Talking to Gervais, he’s like, ‘If one of you has the tip of your pinky toe in, you have hope’. I had my whole self in, my husband still had the tip of his pinky toe (in), so I had hope.”

Now, everything has sorted out between them and they are living a happy life together. According to Heavy, Jennings even has a sweet nickname for his wife ‘six feet of sunshine’ which was also inscribed on her wedding ring. Sweet Isn't it?

This ?? is from the premier of #GoldWithin A documentary about our (my TRIBE) road to #Rio. It was heartwarming INSPIRED & SURREAL amongst a million other beautiful feelings. This is the core of it all. #TeamJennings #J5 I'm so proud to be theirs ?????? I hope you'll TUNE IN to @nbcolympics tomorrow 7/31 4:00 pm EST 1:00 pm PST @dickssportinggoods @tribecadigitalfilms ??????????????

We just hope for the couple to remain like forever with each other.

Three beautiful children of the couple

Both of them seemed to be a lovable father and mother as they often share pictures and videos of them playing and spending quality times with their young ones on social accounts.

Walsh even said that “I was born to have babies and play volleyball”. I’d been playing for so long, and I was like I need balance. All my eggs are in this one basket and it’s very self-centered. They gave me that perspective and balance I thought I was missing.”

She further added, “It took my game and my desire and my passion for life to the next level. I am hugely indebted to my children.”

However, this comment met with some controversy. She was accused of feminism and many people showed their anger with series of tweets.

@cameronesposito Did you just see the piece about Kerri Walsh Jennings? "I was born to have babies..." What is @nbc doing to us?!

@nbc And now a package about Kerri Walsh Jennings: "I was born to have babies." Is Donald Trump running the network now? Get it together.

There are also some people who actually understood what she was trying to say and they supported her through tweets.

Olympic gold medalist Kerri Walsh Jennings gets it: children do not keep us from pursuing our dreams! Walsh says,... https://t.co/07AO1RWYUf

It does not matter what people say she definitely is a great athlete, wife, and a mother. She has also said in the profile of the US Olympic team that, “The balancing act of motherhood and a career, and being a wife, is something that I don’t think I’ll ever perfect, but I love the challenge of it.”