Home Article Benedict Cumberbatch & his Wife Sophie Hunter are expecting their second child together. Know about their family life

Benedict Cumberbatch & his Wife Sophie Hunter are expecting their second child together. Know about their family life 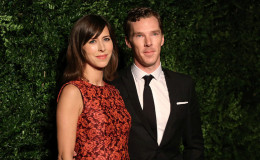 Benedict is no stranger to the world. He has played the most iconic roles such as Sherlock Holmes. Benedict is married to Sophie Hunter and the couple are expecting their second child together.

He has had many romantic flings with many celebrities all across the globe. His charming and witty looks makes any girl fall for him.

He is currently married to Sophie Hunter, an English theater performer. The couple is expecting their second child together.

Benedict and Sophie knew each other for 17 years when Benedict announced on November 5, 2014, that they got engaged.

On the romantic occasion of Valentine Day i.e 14 February 2015, the couple tied the knot in 12th century Church of St. Peter and St. Paul on the Isle of Wight. Their reception was held at Mottistone Manor.

The marriage was done in a low-key manner and only their close friends were invited. When asked why the low-key function he humbly answered, "It was ‘what I would have done if I wasn’t famous."

He also added, "It was a way of telling our friends who we hadn’t been able to tell before some grainy shot of a ring on her finger."

Blessed with two children with Sophie

After four months of their low profile marriage, Sophie gave birth to their first child. It was a boy and according to the reports they named him Christopher Carlton Cumberbatch.

When he was asked about how he felt when he knew that he has become a father now, he jokingly said "I’ve become a father and a husband, and in the right order," adding "It’s everything. I have a new life form that needs his father’s help in the world…I might go for a [Cumber] batch of boys!"

In 2016, it was announced that Benedict and Sophie are expecting another baby together. It was the most blessed moment for the couple to know that they are going to enjoy parenthood yet again.

Sophie was spotted with Benedict in an award function showing her baby bump and confirming the news that another Cumberbatch is on the way.

When asked about how he felt, he excitingly said that having another life form coming to the world and taking care of that is a very big responsibility.

He also said that he respects his parents even more now as he know how much his parents have cared for him.

The couple is very happy with their married life and on top of that, they are now going to be the parents again. The level of happiness that the couple is enjoying cannot be compared to anything right now.