Brennan Elliott Married Cami Elliott in 2011, Know about their Children and Family 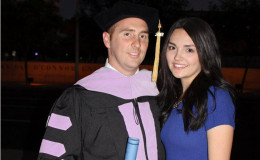 Brennan Elliott is enjoying his married life with his wife, his two children and one pet dog. Let us see what are the family upto these days.

Brennan married Cami Elliott in 2011, and the couple is blessed with two children together. So, let us know more about their conjugal life in detail.

Brennan met his now wife Cami back in the 1990s through the mutual friend, and both fell for each other instantly. After dating for a few years, Brennan finally took a step ahead and proposed the loving girlfriend, Cami.

Brennan married his gorgeous girlfriend Cami Elliott in 2011 after dating for a while. The couple met for the first time in the 1990s. Their couple is like a 'match made in heaven' as they are so fond of each other.

Brennan Elliot getting a kiss from his wife, Cami Elliot

Brennan has got a crazy female fan following all around the world and the reason must be his Irish-Canadian ancestry, his blue eyes and of course his curly hairs but sorry ladies!! The man is in a fully committed relationship with a darling wife and two children.

Know About The Couple's Children And Family

The beautiful couple, Cami, and Brennan is blessed with two children, a son, and a daughter.

Brennan is always uploading pictures of himself and his children on his social media account.

It really shows how much he cares about his children and family. He usually takes them out and plays with him. Being a busy father he is, but he still takes his time out for his family.

Brennan with his son enjoying at the park
Source: Twitter

The family also have another member living with them and that member is their pet dog. Brennan also posts pictures of him on his social media account, and we must say that he is very adorable.

#Snoozefest with my lil #FurBaby. It's these moments I cherish. #simplethingsinlife pic.twitter.com/iZpKhW2sUm

Brennan's children are also fond of the dog as they play with him all day.

The couple is enjoying their life with each other. They have a perfect family of five including their adorable dog.