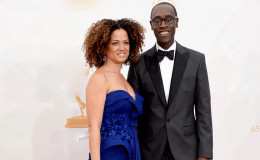 The Golden Globe Award winner for the popular American comedy TV series House of Lies, Donald Frank "Don" Cheadle has been romantically involved with his one and only girlfriend, Bridgid Coulter.

Despite being together for such a long time, the adorable pair was not married until this time when the Iron Man 3 actor recently decided to make his relationship official.

The duo has always cherished their relationship and has remained happy. No wonder how they have managed to maintain an understanding and passionate relationship for such a long time.

Let's unravel all the secrets behind this happy couple and their married life.

The talented actor Don has been romantically involved with his partner, beautiful actress Bridgid Coulter for the last two decades. They have been together since 1992 but were not officially married.

They have been together since 1992 but were not officially married.

Their reasons for not settling seemed legit as in one of the interviews Don revealed this unofficialness of them and said:

”When you are with someone for 14 years, what’s the difference?”.”I have nothing against marriage — it’s just another production that we haven’t gone into yet.”

Adding to this, she told about some of her personal matters to HollywoodRag. She stated:

"I am very happy with him and I am the luckiest woman alive! Marriage might bring divorce and it's a very awful thing that can happen to a person. Marriage also doesn't guarantee that a couple would last forever and I am happy with what I have right now."

As per rumors, the pair has already tied the knot secretly several years ago without any announcement as he has always referred Bridgid as his wife.

Whirlwind 12 hours in Vegas with my guy. Fun. ?? Sara_Paulsen with the always impeccable style support.

Not only that, the pair also have two adorable kids together which alone is enough to tell that they are insanely in love with each other.

Don Cheadle with his wife attending the NACCP Image Awards

Well, they might probably be waiting for the right time but isn't 25 years and two kids together not enough for them to be an officially wedded husband and wife?

Perhaps realizing this, the duo has officially announced the big news recently in April 2016 that they are now legally wedded couple as reported by some reliable sources.

Who is Bridgid Coulter?

Bridgid Coulter is famous for being the spouse of Academy Award winner Don Cheadle. She is of African-American descent and also an actress who has worked in both films and television.

She has worked with Don in movies like Rosewood (1997) and is recently working on HBO hit thriller series Westworld (2016).

Growing up in Berkely, California, she has also appeared in famous TV shows like A Different World, Family Matters, Class of '96 Murder and so on.

As for now, Bridgid works as a principal interior designer and decorator and has opened her own lines of designs of textiles and decorations.

We are delighted to announce our new signature textile collection "Reflections" created exclusively for @Guildery.

Both have managed effortlessly to balance their personal and professional life, taking care of their children and raising them well. The happy family of four resides in Santa Monica, California.

In a new interview, the 53-year-old actor expressed how important is family to him. He said:

“I am somebody who really does want to make sure my relationship stays together and that I am there for the important parts of my kids’ life. There’s going to be a time where they’ll be like, ‘Please go away for three months and do a movie."

"But while they’re still like, ‘Daddy, I want you here,’ then I want to deliver for them. So it’s a juggling act. It’s really tricky. But it’s worth everything it takes.”