Home Article Broadcaster Charlie Stayt and Anne Breckell got married in 1995. Know about their family and children

Broadcaster Charlie Stayt and Anne Breckell got married in 1995. Know about their family and children 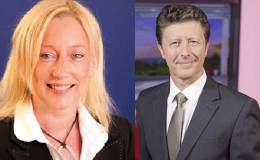 The popular broadcast journalist and presenter of the famous show BBC Breakfast, Charlie Stayt, has won the hearts of millions of his viewers with his outstanding skills and a charming smile!

Most of you might not know that this handsome journalist is already taken; it means he has been married for a long time and is living happily with his wife and family.

In this section, we'll talk more about his married life and relationship and find out all the stories you need to know.

Though he is one of the renowned faces of BBC and appears almost every day on the news and live reports, he's rarely seen in the public.

Charlie has not mentioned anything about his personal life and marriage till date.

Nevertheless, as per our sources, we found that Charlie has been married since 1995 to his lovely wife Anne Breckell.

They were in a long and committed relationship back then and eventually tied the knot and it has been happily ever after since then.

The bold and beautiful Anne Breckell works as a manager in a multinational company.

Besides this, there has not been any news or rumors swirling up about the duo getting divorced or having extra-marital affairs.

So, it seems that they are still madly in love with each other like the old times and are immensely happy with their married life.

Charlie is not only a loving and committed husband, but he's also a proud father of two. The pair shared their parenthood together raising two beautiful children, a son and a daughter: Jake Hamilton and Phoebe Senara.

The family has managed to maintain a low profile in the media and are not seen publicly together. The beautiful family of four now lives in London.

Born and raised at Gloucester, in the West of England, Charlie started his journalism career quite late. Before that he worked as a roofer, roadie as well as a barman in his early days.

After finishing graduation, Charlie landed a job as a radio host, hosting Capital Radio's award-winning news program, The Way It Is and also reporting for LBC and BBC Radio 5 live.

Before joining Breakfast, Charlie was the principal anchor with Five News, presenting the network's prime-time bulletins and the half hour live debate programs.

Similarly, he has also hosted two live reality TV shows; JailBreak and Are You Telepathic.

Since January 2008, he has been the weekend presenter for BBC Breakfast, the early morning news program broadcast on BBC One and BBC News.

We wish that the proud father, a loving husband and the talented broadcaster, Charlie, continues doing what he does the best and have a wonderful family and successful career together.