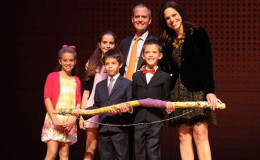 Love is surely the most beautiful thing in the world and when we fall in love nothing matter to us neither race nor gender.

CNN’s Soledad O’Brien and her husband Bradley Raymond are one of those couples who has set an example to the world that nothing matters when you are in love.

The interracial couple has been married since 1995 and their love for each other is still the same. They are also blessed with four children two daughters and two twin sons.

Born to an interracial couple Soledad, married her white husband Brad Raymond in the year 1995.

We used to believe that the ‘happily ever after’ only exist in fairy tale but this couple has somehow made us believe that it exists in real life as well.

Brad is currently working as an investment banker. It has been twenty-one years since the pair got hitched and nothing has changed between them.

Two decades together and still there are no rumors of a divorce and whenever we see them it looks like they have just got married; so much passion and so much love for each other.

Couples like them are one of the reasons that people still believe in true love and true romance.

The talented reporter was born to a Cuban mother Estela Lucrecia and an Australian father Edward Ephram O’Brien.

Her parents first met while they were studying at Johns Hopkins University in Baltimore in the year 1958.

It was love at first sight for Soledad’s father and he would ask her every day to her mother if she would like a ride home.

Her mother always used to answer no but one day she accepted the request and their love story begin.

It may sound not a big deal in today’s ear but back then it was a big thing and interracial marriage was illegal in Maryland where a white person was not allowed to marry a black person.

However, when you are in love nothing can stop you. In 1958, her parents drove to Washington, D.C. to get married and later on came back to Baltimore.

It was illegal for my parents (an interracial couple) to get married until a Supreme Court ruling in 1967. Soooo... https://t.co/8Zbf9U00gS

Later on, in 1967 the U.S. government capsized the ban against interracial marriage.

Hey @OldNavy --I think interracial families are cool! My parents marriage was illegal in 1958. Here's mom, dad & me pic.twitter.com/cTstOibJ9e

Soledad is not only a responsible wife but also a proud and caring mother of four children.

On 2000, she gave birth to her first child, a daughter, named Sofia Elizabeth and her second daughter Cecilia Raymond was born in 2002.

Similarly, in the year 2004, she and Brad welcomed their twin sons Jackson Raymond and Charles Raymond into their world.

O’Brien loves her children like every other mother. In one of her interviews, she said that she loves her kids very much and the best part of her day is when she goes back to her home after work where her kids waiting for her.

She said, “Coming home, when everybody says, “Mom! Mom’s home!”- Almost with a look like they thought maybe you weren’t coming back” is the best part of her day.

Always, right? Do they think I've raised 4 kids without figuring out how to deal with sass?? https://t.co/1wPGv2u7Pc

Undoubtedly Soledad is the perfect daughter, a wife, and mother as well as successful personnel. We would her to remain like this for the rest of her life.

Having dropped 4 kids at pre k over the years, here's what I've learned: happy (and fulfilled) mom, happy everyone https://t.co/gNpyfMGQ3x