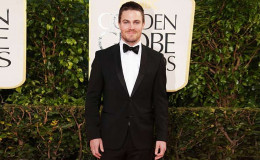 Everyone knows Stephen Amell as a renowned Canadian actor but how many of you know that he is an avid fan of wrestling? He is a two-time winner one in the WWE and the other in ROH.

It is often said that once a married life starts, many things in life changes. So was in the case of Stephen Amell as the star's opinion about Coachella music festival changed.

Arrow star Amell a huge fan of WWE, also won a tag team match at SummerSlam 2015, is happily married to Cassandra Jeans. Before their marraige Amell hated the Coachella music festival, he never went to one but just had a strong opinion about it. But later, things changed and also his opinion abou the festival. So what actually happened? We have all the details about this and their relationship too.

Stephen Amell used to be a Coachella hater but his wife completely changed his opinion. Coachella is actually 'The Coachella Valley Music and Arts Festival' that comprises world-renowned artists and bands including some wonderful art installations.

His wife enjoyed the festival so much, so to make her more happier, Amell also once went along with her and to his delight he actually loved it. Since then the pair attend the festival together. 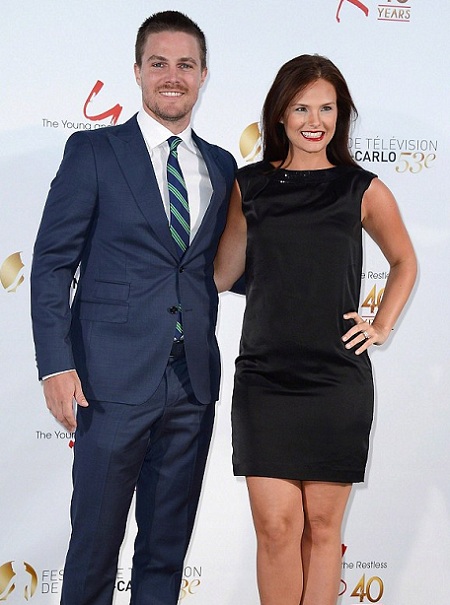 "Ever since we met in late 2011, my wife has raved – no pun intended – about Coachella. I decided – in a semi-joking way – that I was going to hate it for no reason whatsoever. And I’d poke fun at her when the setlist was released and she’d get excited."

Amell used to stay home when his wife went to the festival, but in 2014 things changed. In his words,

'Then last year during Coachella, something felt different. She was at our house, with our friends, doing something she loves... without me. That's not how a marriage / friendship / partnership should work. If your Wife (or whatever) loves something, you should love it too.'

He decided to acompany her to the festival and suprisigly he ended up loving the festival. He said,

\We did everything she wanted to do and I got to share an experience that brought us closer together because doing something your partner loves always helps you understand them better. What a weekend. Until next year.\

Since then the couple has been enjoying the festival together.

Sources say that Stephen began his romantic life with Jeans in 2009. After three years of dating and knowing each other, they announced their marriage.

The couple who married in 2012 has a daughter Mavi Alexandra Jean Amell born in October 2013.

Not just once, the gorgeous couple married two times. The first was a private ceremony held in the Caribbean and second time on 26 May 2013.

My wife is telling me there’s something in my ear during this photo. Honestly, that’s what marriage is all about. Happy anniversary, Cass.

They seem happy together and often posts pictures on Instagram which suggest that the couple is living a happy married life.

Here's a video of Amell answering some questions about his personal life.

It seems they have a long way to go as a lovely pair!

Amell was tentatively set to wrestle Stardust (Cody Rhodes) at WWE's SummerSlam on 23 August 2015.The match was rumored to be dismissed after the death of Stardust's father Dusty Rhodes in June 2015. 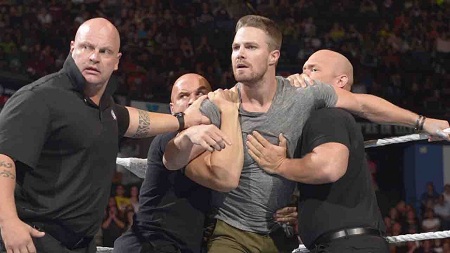 Stephen Amell in his Summerslam match in August 2015
Source: IGN

However, at an event on 23 August, Amell and Neville defeated King Barrett and Stardust in a tag team match.

After the major event, he made his return to the pro wrestling world and once again the Missing star had no fear to get physical.

In Nover 2017, he appeared on Friday night as part of Ring of Honor's Survival of the Fittest 1.

He joined the Buttet Club stable which also included Cody Rhodes. During the match, he teamed with Rhodes, Kenny Omega, and The Young Bucks against The Addiction, Flip Gordon, and Scorpio Sky.

Following his appearances in WWE and ROH, Amell is now undefeated (2-0) in the pro wrestling business. 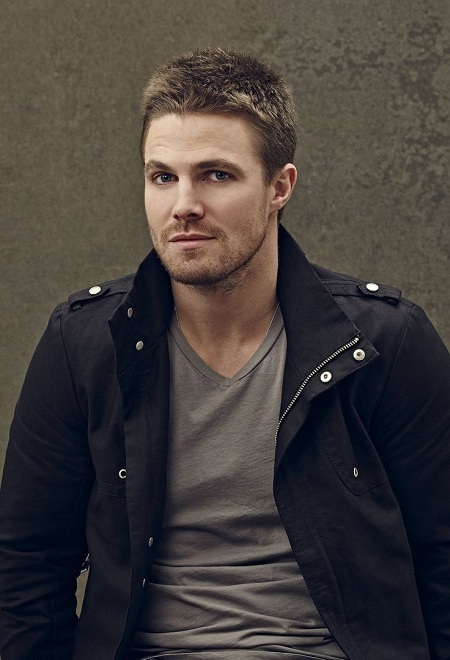