CNN's Jennifer Westhoven is living a blissful life with husband Joe Palese and her children. 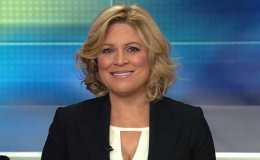 The CNN reporter Jennifer Westhoven has succeeded to manage her personal life and professional life with grace and talent.

Jennifer Westhoven is an American reporter, currently  a correspondent to HLN. She is a beautiful and independent lady who has succeeded to manage her both personal and professional life.

The reporter married yoga instructor Joe Palese who teaches yoga in New York city and is also a musician. The duo was in a long term relationship when they engaged in November 2006.

Jennifer and Joe exchanged their wedding vows in 2007, after a year of their engagement. The couple shares completely different patterns of professions.Yet, they are happy with each other.

Despites the fact that Jennifer is a media person, she has kept her personal life away from the limelights. She keeps her life to a low profile and so does her husband Joe.

According to latest updates, the duo has two children- a son and a daughter. After three years of getting hitched with Joe, the reporter announced her pregnancy on 2 December 2010 and gave birth to a baby boy on April 21, 2011, named is James Palese.

Similarly, in 2014, the CNN reporter gave birth to a baby girl.

If you are habituated to watching CNN, you probably may know who Jennifer Westhoven is. Well, she is a talented reporter working as a correspondent to HLN.

She has been with the CNN for twenty years starting with CNNfn. She covers an economy, business, personal finance and money topics.

She is already in her mid-forties, but her personality defines her age much younger than she actually is.

Westhoven has come a long way in her career with over twenty years of experience in the television industry. CNN pays a good amount of salary for her dedication and hard work.

Her total net worth is $2.5 million. Certainly, she has got a good income which is annual $200,000. She has done notable work in 'Morning Express with Robin Meade' on HLN.

Despites being talented and beautiful, the reporter of age 45, has never mislead her life and career path. She is equally loyal to both  family and work. This quality of Jennifer is worth admiring.

This loyalty of hers has made her married life easy and blissful. Her husband, Joe finds himself lucky to get her as a life partner.

Jennifer, on her side, thinks her husband and children are the best things that have ever happened to her. The possibility of divorce is very rare in their relationship.

This mutual understanding between the two has helped them complete nine years of marital life. The duo is always far from split news and rumors .