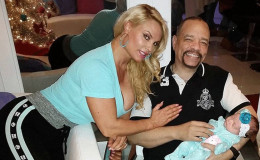 After being together for a long time, rapper Ice-T and Model Coco Marie have their first ever child to be a daughter. What else do this couple have to reveal about themself?

Once known as Nicole, the newly named model “Coco Marie” is married to rapper Tracy "Ice-T" Marrow in January 2002.

It’s been around 14 years of them being together, and this couple had even renewed their wedding vows on June 4 which also had happened to be their wedding anniversary.

Coco And Marrow on their Wedding

This couple has been together for a long time and sure enough have a sweet home in Edgewater, New Jersey since the end of 2012. Apart from this, this loving couple also owns a condominium in North Bergen, New Jersey.

Mom Coco and Baby Chanel fall asleep in the Car

After being married for years, this couple announced that they finally would have the epitome of their love who came into the world on November 28 2015.

They had already revealed the sex of their child to be a girl whom they had decided to call Chanel. The mother of the baby, Coco had taken her happiness to her instagram and revealed how proud and happy they were.

Surprise!!! Look who came early!! Welcome the new arrival of Chanel Nicole.. A beautiful healthy 5.7 pound and 18 inch baby girl .Ice and I are so proud! I cried while she was coming out I was so excited to meet her! PS..She now has her own Instagram page @babychanelnicole

This couple does not only love their daughter insanely but give kindof equal amount for their 4th member of their family; their pet dog Spartacus who died just the day before Chanel’s first birthday when he was at the age of 6.

My crew chilling in AZ.. The boys are sad we're not lounging in the pool

And this couple took some time to mourn their loss and delayed their very own daughter’s first birthday party.

They seem to really miss him and Coco even thinks that he was her first child.

Coco's instagram account holds a lot of photos of Chanel and Spartacus which are so cute that one would simply not go on without saying Wow at least one time.

Princess Chanel when she was 2 weeks old!

Not only this, baby Chanel even has her own instagram at the age of 1 and her parents have made sure her photos awe everyone.

Chanel and I work well together in photoshoots! Here's a little candid shot for ya! More to come!

Nicole, though, she has been in his life for a long time and they have been settled properly, does not hold the privilege of being the only woman in his life.

Before her, Rapper Ice-T has welcomed a lot of women in his life amongst whom, one of his girlfriends, Adrienne had given birth to their daughter LeTesha while they were attending high school and raising her simultaneously, and he has a son from his second girlfriend Darlene Ortiz.