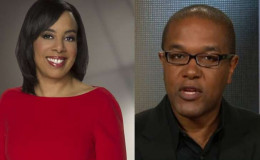 It has already been nineteen years since the couple tied the knot and their relationship is still going very strong.

Married Life of Sharon Epperson and Christopher Farley: Is The Couple Still Living Together?

Sharon and Christopher got hitched in the year 1997 at the Heinz Memorial Chapel at the University of Pittsburgh.

Since, then the adorable pair is living a fairytale life where there is so much love, happiness, and trust for each other.

As the duo has always lived a very low profile they have made very difficult for us to know about their personal life.

They have maintained so much privacy and has always maintained a proper distance from the limelight.

However, we can surely say that they are living a blissful life as there has been no rumor regarding any sorts of the problem or divorce between them.

According to the available reports, they have two children a son and a daughter but they have always managed to maintain the secrecy of their young ones to avoid the paparazzi.

Whatever may be the reason behind their private life as long as they are living a peaceful life nothing really matters.

CNBC's Epperson explained about her life-threatening brain aneurysm on Megyn Kelly TODAY where she joined along with her husband.

She explained that she was exercising when an aneurysm burst in her brain. She is so thankful for all her loved ones for surviving it and advised people to "stop and listen to your body" and recommended disability insurance.

Sharon Epperson currently works as a senior personal finance correspondent at CNBC where she discusses managing mortgage, student loan, saving and investing for retirement and so on.

She is very good at her job and was also named one of the ‘Best Personal Finance Experts of 2014’. Similarly, her finance expertise has been featured in several publications including The Washington Post, The Wall Street Journal, USA Weekend and so on.

Likewise, Sharon also hosts the video program on original CNBC, ‘Retire Well’ and appears frequently on the program, Nightly Business report’ and ‘On the Money’.

She has also won several awards including ‘Alliance for Women in Media’s 2014 Gracie Award’, ‘All-Star Award’, ‘Vanguard Awards’, ‘National Association of Black Journalists ’and so on for her outstanding contributions.

Is your financial advisor vulnerable to a cyberattack? Protect yourself & your money! Watch @CNBCClosingBell 4p ET https://t.co/94a2Ks7ycD

Not only journalists but she is also an author and has written a book named ‘The Big Payoff: 8 Steps Couples Can Take to Make the Most of Their Money-and Live Richly Ever After’.

Her book was honored for changing the life of million people. Likewise, Sharon was also a contributing writer for another book named, ‘The Experts’ Guide to Doing Things Faster’.

Got a big wedding coming up? Use these tactics to cut the costs of attending https://t.co/cU18sGymeH @CNBC #YourMoneyYourFuture

Just like his gorgeous wife Christopher is also a very hardworking and talented person.

He currently, works as the Wall Street Journal’s Senior Editorial Director and also writes a weekly entertainment column titled, ‘On The Horizon’.

Similarly, he is the author of three successful novels, ‘Kingston by Starlight’, ‘Game World’, and ‘My Favorite War’.

Likewise, Christopher has written several nonfiction books including ‘Before the Legend: The Rise of Bob Marley’ and the national bestseller ‘Aaliyah: More than a Woman’.