Home Article Dan Reynolds and Aja Volkman married in 2011. Know about their children

Dan Reynolds and Aja Volkman married in 2011. Know about their children 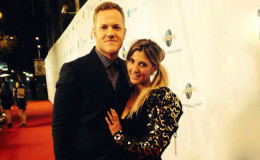 In a nutshell, Dan Reynolds and Aja Volkman are the perfect couple as the same passion and they seems living happily with their children's and they no plan for divorced yet.

Dan Reynolds is an American musician, most famous as the lead singer of a popular rock band Imagine Dragons.

He is a happily married man. Dan Reynolds and Aja Volkman tied the knot in 2011. The couple also has a beautiful daughter together. Let’s find out more about their married life and children below.

Reynolds met Aja Volkman on an opening set of Nico Vega as the band was the receiving the 'lead artist in the year 2010'.

He welcomed her to help him complete a few demo tape on which he was working on. After that, the two of them decided to work together and released the album named Egyptian. While working together they slowly began liking each other and started dating. After a few years, Reynolds proposed Aja to be his forever.

Sooner, the love duo got married on March 5, 2011, in Las Vegas, Nevada. They have never been any rumors of them having any sorts of problems in their marriage or getting a divorce with each other. They have blessed with a beautiful daughter named Arrow Eve Reynolds who was born on 8th August 2012.

Dan and Aja spend the lots of the time with their lovely baby and shared those moments for their fans through social media.

There are also some rumors of Aja getting pregnant once again and this time she is expecting a twin. However, both the pair has not announced officially.

Prior to his singing career, Reynolds is a member of 'The Church of Jesus Christ of Latter-day Saints.' He has earned the rank of Eagle Scout in 2005.

At the age of 19, he was volunteering in Nebraska for a couple of years. He composed the tune “I Bet My Life” celebrating and thinking about his continuing association with his parents.

Imagine Dragons published their first album entitled “Night Visions” in September 2012 and was able to win the BYU’s “Battle of The Bands” and some other tournaments.

The 'Night Vision' was also able to win a Billboard Music Award for 'Top Rock Album' and was nominated for a Juno Award for International Album of the year. He has also released an extended play titled Egyptian-EP with his wife. He has also received the 'Hall of Fame Hal David Starlight Award' from the songwriters.

Imagine Dragons has been nominated twice for the Grammy Award and was able to win 'Best Rock Performance award.'

The adorable duo is living happily and we wish them to remain like this for the rest of their life.