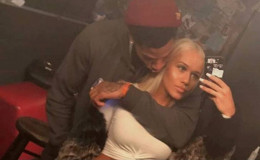 Derrick Rose is known for his three-pointers in the basketball court but this time he has scored a three-pointer off the court as well. Let us meet his hot new girlfriend Alaina Anderson.

Derrick Martell Rose is an American professional basketball player. He is known for his tall and muscular physique. That may be the reason that Derrick has so many female followings all over the world.

He is currently dating Alaina Anderson and the couple is already displaying their love in the social media as they post many PDA pictures of themselves.

They are often spotted getting cozy with each other. Rose and his girlfriend Alaina often uploads hot pictures of themselves in social media.

Derrick was previously in a relationship with Mieke Reese and the couple also has a child together.

However, Mieke broke up with Derrick because of Derrick's alleged relationship with a stripper. On her Instagram account, Mieke uploaded a picture and said that this picture is the current relationship status of the couple.

She happily said that even though they are not together anymore the love that they will give to their son will be equal.

She said that Derrick is also his father and he has all the rights that a father has. This really shows that the couple is in very good term with each other even after their breakup.

On August 26, 2015, a woman named Jane Doe filed a case against Derrick and his friends Randoll Hampton and Ryan Allen.

The women allegedly claimed that on August 27, 2013, the three men drugged her and gang raped her in her own apartment.

The woman asked for 21.5 million dollars for damages. In the end, the jury of six women and two men declared that Derrick was not guilty. The jury said that the woman is a sexually adventurous gold-digger.

Don't see this every day. @drose and atty posing with giddy jurors after verdict. #DoevRose pic.twitter.com/hbmxnPnyf6

Derrick is currently in a relationship with IG model from Chicago Alaine Anderson. He bounced back with hot pictures of him and his new girlfriend on the internet.

A photo posted by Derrick Rose (@derrickroseformvp) on Sep 10, 2016 Derrick and Alaine post many funny pictures of themselves in their social media account which clearly depicts that the hot new couple is enjoying themselves with each other.

Alaine is all over the internet because of her hot figure and her alleged affair with Rose.

Both Derrick and Alaine are very happy with each other and they look like a couple who doesn't have anything to care for in this world.

They are currently enjoying each other's company and we think that the hot couple may end up getting married.

We wish them success in their relationship and really hope that they can take it all away to the marriage.