Home Article Did Morgan Lolar & Evan Smith From Temptation Island Break Up For A Publicity Stunt?

Did Morgan Lolar & Evan Smith From Temptation Island Break Up For A Publicity Stunt? 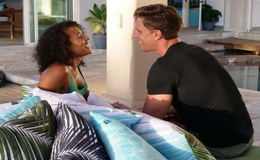 A ship has sailed. By the glimpse of Morgan Lolar's Instagram, fans are convinced the Temptation Island's alum broke up with her boyfriend turned fiance, Evan Smith, who she met on the reality show. But, a recent comment mention left by Evan on a baby post tells otherwise. *In Oprah Winfrey's voice*, 'So, what's the truth?'

As much as fans are left assured on the breakup, fans are left super confused too. So, did Morgan Lolar and Evan Smith really break off their engagement in less than six months? Here's all the drama in a nutshell.

From the beginning, Morgan, and Evan alongside his girlfriend of ten years at the time Kaci Campbell join Temptation Island, a reality show, where couples get to live with single people to test their loyalty. 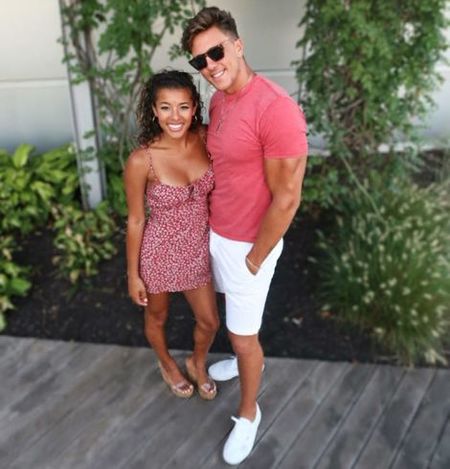 Long story short, Evan fell for Morgan and cheats on his loyal girlfriend failing the loyalty test. As a matter of fact, he doesn't even end things with Kaci until she finds out herself and confronts Evan about it. But, the fitness coach was already head over heels in love with Morgan and chose to go home with the model, betraying Kaci.

As a matter of fact, Evan left California and moved to Virginia to live with Morgan who he proposed in March 2019. The love birds were upfront to share the happy news on both of their Instagram with the engagement pictures.

Not to mention, Lolar and Smith even planned for a wedding after the end of summer 2019. Unfortunately, their wedding plans seemed to have backfired. But, the worse was still yet to come.

Lolar Accuses Smith Of Cheating On Her

On 11th Jan 2020, the real estate agent took to Twitter alleging that his fiance cheated on her with a 21 years old Instagram model. According to her tweet, Evan lied Morgan about flying across the country for work, because in reality, he was actually having a sleepover party with another girl. 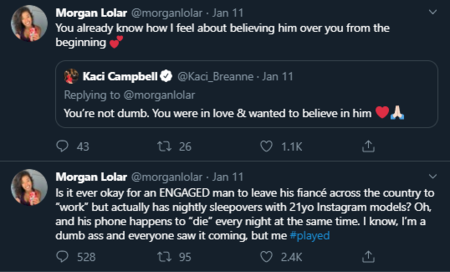 But, surprisingly, she had the support of Kaci who tweeted back at her comforting that she wasn't dumb and that she only believed Evan because she was in love with him. Not long after that, Morgan deleted all of the pictures taken with Evan from her Instagram.

And, amidst all the breakup speculation, Evan tagged the curly-haired beauty on a post of baby pictures shared by E!News, nearly two weeks later of the cheating tweet. Like what? 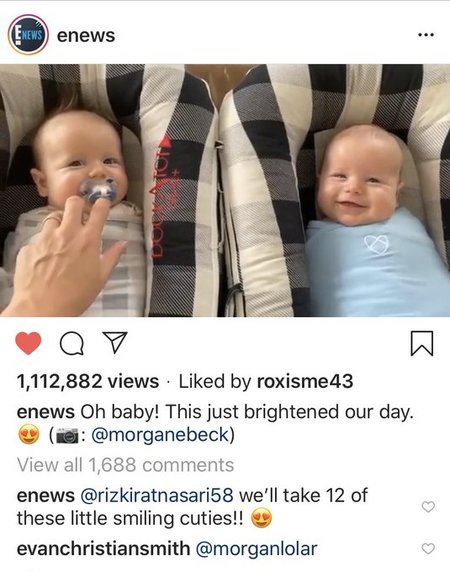 Lolar had an answer though and replied to a fan that she was actually offended, with further adding that she has always been real and didn't need any publicity stunt. Evan, however, still has all of the posts with Morgan on his Instagram feed, except for the engagement pictures, which has been since deleted.

Moreover, Evan hasn't updated his Instagram either, since last December. But, recently his tattoo artist showed off a new tattoo of a wolf on Evan's arm on Instagram. But, what's even more complex is the fact that Morgan still has herself flaunting engagement ring on Instagram.

At this point, only time can tell.